The FLOTUS is trending on the blue-bird app with many praising her sense of style after she's photographed rocking fishnet tights and heeled booties when deplaning Executive One.

AceShowbiz - Like previous First Ladies of the United States, Jill Biden's fashion style has exceptionally gained public's interest since her husband's inauguration in January. Fortunately, this has gained her more supporters than haters as her latest outfit has become the talk of the town.

FLOTUS became a trending topic on Twitter on Sunday, April 4 after Dr. Biden was photographed rocking a pair of black floral fishnet tights and black heeled booties when deplaning Executive One. Completing her look were a semi-pleated leather skirt, a fitted black blazer and a black face mask. 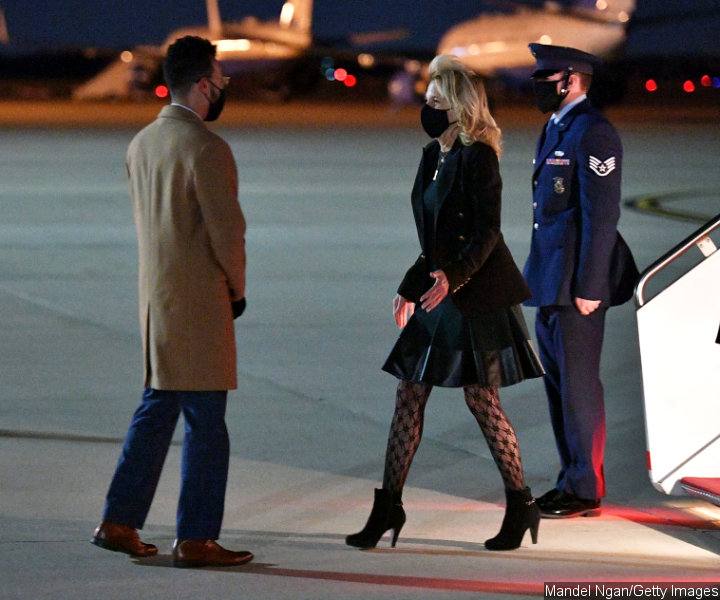 Twitter users have since been gushing over her unexpected, but chic outfit. "It's nice to have a FLOTUS with a sense of style," one raved on the blue-bird app. Another supportive fan wrote, "Yes @FLOTUS. Werk it girl."

"I'm not mad at her sophisticated sexiness. #FLOTUS #fashion," a third one noted. Someone else added, "FLOTUS, go on with your bad self and rock those fishnets. Just remember that you don't look like furiously angry plastic blow up doll."

Still, there's a number of Republican supporters who blasted Dr. Biden for her sexy outfit and compared her to former First Lady Melania Trump. "FLOTUS is a Fake Doctor but dresses like a real $5 whore. This is unbelievably bad," one of the critics wrote. "As if the country going to hell in record speed wasn't enough. Can someone please DRESS this *FLOTUS? This is a fashion crime."

Coming to her defense, one wrote back to the haters, "Dr. Biden's MASK in that photo was more fabric than Melanie ever wore in her boobies out 'high fashion' pics. I never shamed the 'Einstein Visa' recipient for being naked for cash all the time. Our current FLOTUS is classy. And her hosiery is no one’s damn business but her own."

Prior to this, Dr. Biden surprised reporters with her elaborate April Fools' Day prank. The First Lady dressed as Jasmine, the flight attendant who gave out ice cream, during a flight back to Washington from California on Thursday.

The 69-year-old put on a short black wig, black pantsuit and face mask to disguise herself, according to reporters on the trip. She also completed her outfit with a name tag that read "Jasmine." The staffers seemed to be unaware at first when the First Lady handed out Dove ice cream bars to staff, press and Secret Service, until she took off her wig and revealed her disguise. "April Fools," she said.