Pregnant Shawn Johnson 'So Shocked' When Finding Out Gender of Baby No. 2

AceShowbiz - Shawn Johnson is offering fans and followers an exciting update on her upcoming second child with husband Andrew East. Two months after announcing her pregnancy, the former Olympic gold medalist spilled in a gender reveal video that she was "so shocked" when learning about the sex of her unborn baby.

Through a video posted on her family's YouTube channel on Friday, March 26, the 29-year-old revealed that she and her husband are expecting a baby boy. In the 20-minute-long video, the two of them were seen jumping for joy as they found out about the sex of their baby after blue paint was sprayed on their white outfits.

Explaining her feeling towards the gender revelation, the gymnast began by saying, "I was so shocked because in the back of my head I kept saying a boy just because everything was different." Spilling more, she opened up about her pregnancy dreams, "I truly thought we were gonna have a girl. I even had dreams that we're gonna have three girls and have a girl family."

The mother of 17-month-old Drew Hazel claimed that she hasn't thought about having a baby boy. "We were locked in. I designed a nursery [room] for a girl," she disclosed. Her husband Andrew, however, confessed that he "did kind of want a boy." He reasoned, "Because you want to experience what it's like to parent and raise both, you know."

Andrew then jokingly told Shawn, "So, we are either gonna have a boy this time around or keep having kids...until we had a boy." With a laugh, Shawn replied, "Yeah, we really wanted to experience both, yes. But, again, we would have been happy no matter what. But, we're having a boy!"

Not stopping with the YouTube video, Shawn shared her excitement via Instagram. She posted a photo of herself and her husband jumping in joy after learning about their unborn baby's gender. In the caption, she declared, "A BOY [love] @drewhazeleast you are going to have a BABY BROTHER!!" 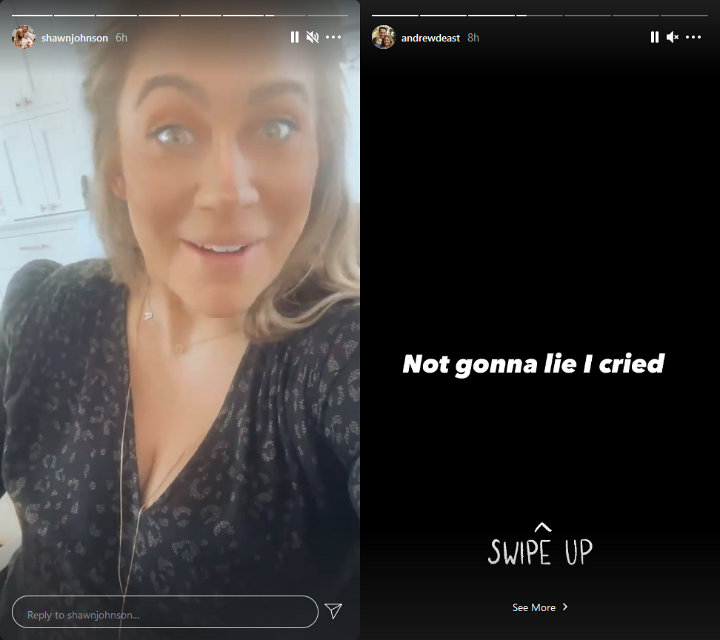 Shawn also shared the happy news via Instagram Story. "We're having a boy! Oh my gosh," she said in a short clip, before adding, "We have no names picked out." Andrew, in the meantime, used his Instagram Story to express how he felt after finding out the gender of his unborn baby. "Not gonna lie," he wrote, "I cried."

Pregnant Shawn Johnson on Testing Positive for COVID-19: My Body Is Exhausted