The former judge of 'The Voice' talks about his band's next studio installment, confirming that the new album is done and is expected to come out sometime soon.

Frontman Adam Levine has confirmed the "Sugar" hitmakers finished their follow-up to 2017's "Red Pill Blues" amid the COVID-19 pandemic and teased it's "not far off" being released.

The pop star admitted 2020 was "a strange year to make an album" and he struggled to get "fired up" in the beginning, but once he started focusing on just writing songs, things took off quickly.

On making the record in quarantine, he told Zane Lowe on Apple Music 1, "I couldn't really be fired up the way I normally was. So I had to just kind of experiment and then try different things. And doing it all at home, and balancing everything with helping family out, and there were a lot more variables than I think ... We've all been facing a lot more variables and unknowns over the past year, so it was a strange year to make an album. "But once we got into the rhythm of it, it was pretty easy, because I just kind of immersed myself in it, and once I kind of got lost in the process of just continuing to write songs. And it was like that's always how it is, man. Once you get started and the snowball rolls, it's just you're there."

Maroon 5 have just dropped their collaboration with rap sensation Megan Thee Stallion, "Beautiful Mistakes", and Adam hailed the "Savage" hitmaker for bringing "a more epic kind of climax" to the song, which sees her show off her vocal talent as well as rapping skills.

"I told her that when we finally met up, because obviously everything was done separate," he explained. "And when we actually saw her in person, and we shot the video together, I told her. I was like the little break where you go to the melodic thing, to be honest, it actually shows this new kind of branch of what she does, and this new versatility that she's going to show everybody right now. And I was so, I remember when I heard it, I was like, oh, that's big. That's a side of her I had never really heard yet. Well, it's one of those great songs that I think kind of continues to build. And the way she built her part was just, it couldn't have been a more epic kind of climax for the song. I mean, it really is absolutely perfect. So, I mean, what she did was just miraculous, and it brought the song to a whole new level."

Listen back to the full interview on Apple Music 1 now.

Maroon 5 Push Back Tour to Summer 2021 Amid Coronavirus Pandemic 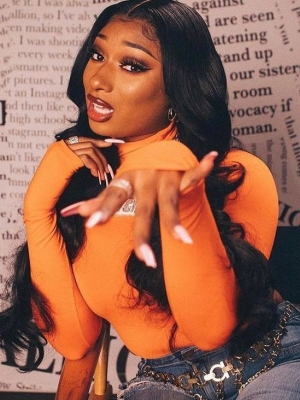