The 'Look What You've Done' singer, whose new 'Poster Girl' album will be released on March 5, has been described by the music company as 'a real artist' who 'also stands for something.'

The singer, whose new album "Poster Girl" drops on Friday, March 5, released her breakout album "So Good" in 2017. She has enjoyed a run of hits including "Ruin My Life", "All The Time", "Lush Life", and "Never Forget You", as well as collaborations like "A Brand New Day" with BTS (Bangtan Boys) and "Like It Is" with Kygo and Tyga.

Larsson said in a statement obtained by Variety, "I'm so excited to start working with Johnny, Katie and everyone at Sony Music Publishing. They have such an incredible team and roster and I can't wait to be a part of it."

"Ola Hakansson and the Ten team together with the Epic team have done an amazing job building her career into becoming a global superstar, and we very much look forward to being a part of the team and taking Zara to new heights!"

"Look What You've Done" is the first single released from the 12-track album which will feature her 2020 hits, "WOW", "Love Me Land", and "Talk About Love" (featuring Young Thug).

The singer will be hosting an online concert on her YouTube channel for International Women's Day on March 8.

Emmanuel Acho to Take Over Chris Harrison's Hosting Duty in 'The Bachelor: After the Final Rose' 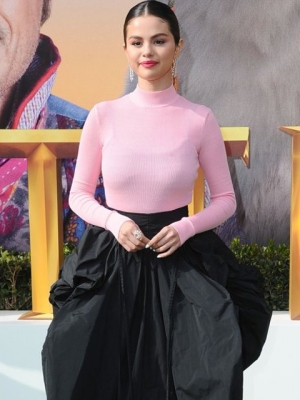