Rick Kriseman calls out the 'In da Club' rapper on Twitter for ignoring COVID-19 safety protocols as revelers are seen partying without masks and ignoring social distancing.

AceShowbiz - 50 Cent has angered Florida official with his Super Bowl party. Upon learning the "In da Club" spitter had hosted a "stupid" maskless bash in celebration of the annual big football game, St. Petersburg Mayor Rick Kriseman took to social media to publicly call out the former.

The 58-year-old politician slammed the rapper via Twitter on Sunday, February 7. Along with a TMZ article reporting about the latter's bash, he tweeted, "This isn't how we should be celebrating the Super Bowl. It's not safe or smart. It's stupid. We're going to take a very close look at this, and it may end up costing someone a lot more than 50 cent. @TMZ." 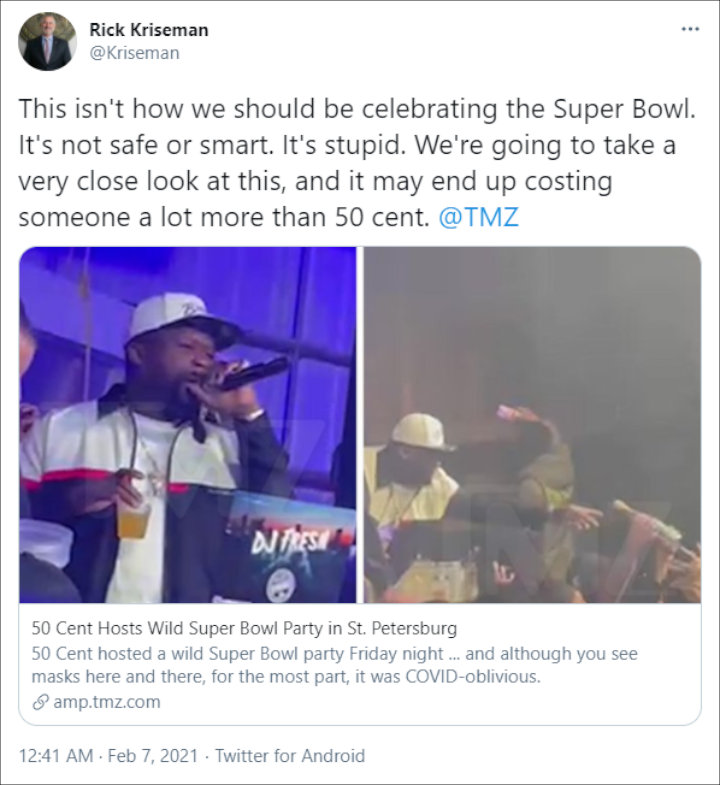 Rick's condemnation came after 50 Cent was seen enjoying a wild Super Bowl party at a private airport hanger in St. Petersburg on Friday, 5 February. He was joined by Tampa's own DJ Fresh in entertaining the packed crowds.

The "Many Men" spitter's party was supposed to be "limited capacity" bash with masks being required, TMZ reported. However, in a clip obtained by the outlet, he was seen performing in front of revelers that were partying without putting any face mask on and ignoring the social distancing guidelines.

50 Cent's celebration came around a week after Dr. Anthony Fauci urged fellow Americans against having Super Bowl parties. "I mean, watch the Super Bowl on TV, enjoy it. Have a party in your house with your family with the people who are there," Anthony pleaded when speaking on "Good Morning America".

"But you don't want parties with people that you haven't had much contact with, you just don’t know if they're infected," the doctor went on. "So as difficult as that is, at least this time around, just lay low and cool it."

50 Cent Unsure About Participation in Pop Smoke's Next Posthumous Album

50 Cent's Girlfriend Cuban Link Sends Much love to Vivica A. Fox: 'I Apologize'