The couple, who got engaged back in July, had to stay apart during the holidays since Brooklyn was in the U.K. with mom Victoria, dad David Beckham and his siblings.

AceShowbiz - Brooklyn Beckham and Nicola Peltz were not able to celebrate their first Christmas as engaged couple together. Around six months after getting engaged, the 21-year-old model and his actress fiancee were unveiled to have spent the holidays season separately.

The oldest child of David Beckham, per reported by PEOPLE, got together with his family in the U.K. while his fiancee spent time with her family in Palm Beach, Florida. In an Instagram photo shared by his mother Victoria Beckham a.k.a. Victoria Adams, he could be seen posing next to his parents and siblings, Romeo, Cruz and Harper.

In the caption of the snap, Victoria greeted her fans, "Merry Christmas everybody!" She then added, "Sending lots of love from us all x family time is so precious x kisses @davidbeckham @brooklynbeckham @romeobeckham @cruzbeckham #HarperSeven x."

Victoria's Christmas greeting came just days after her future daughter-in-law Nicola shared on Instagram Story a screenshot of a 12-hour FaceTime call with Brooklyn. "we fall asleep on the phone together every single night @brooklynbeckham," the "Back Roads" actress captioned the December 18 post. 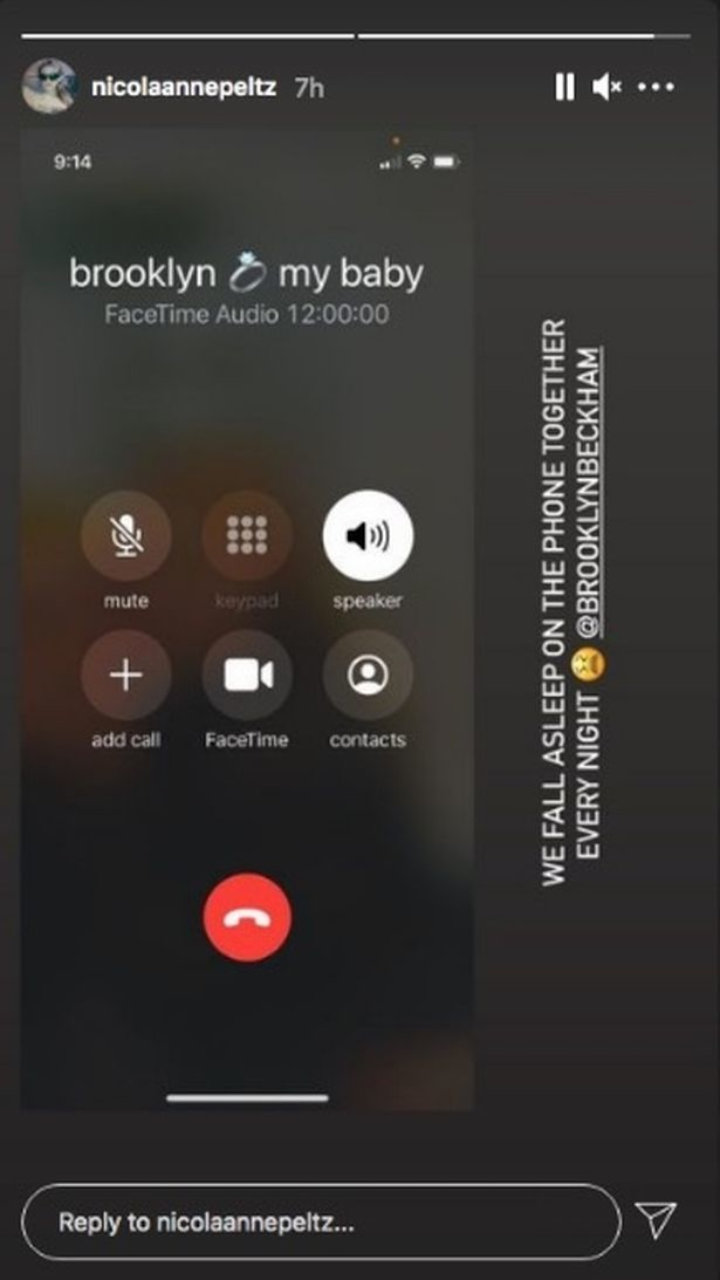 Nicola Peltz shared a screenshot of a 12-hour FaceTime call with Brooklyn Beckham.

While Nicola and Brooklyn stayed apart during Christmas, they did celebrate Thanksgiving together with her family. "Nicola spent the majority of the summer with Brooklyn's family in Europe, but they have since returned to the States. He has been staying in Palm Beach at her family home with Nicola and her family," a source told PEOPLE in November.

Nicola and Brooklyn made public their engagement back in July. Sharing a sweet shot of the two on Instagram, the British model penned, "Two weeks ago I asked my soulmate to marry me and she said yes xx I am the luckiest man in the world. I promise to be the best husband and the best daddy one day I love you baby xx."

His bride-to-be, in the meantime, took to her own Instagram page to put out an identical picture. "you've made me the luckiest girl in the world. I can't wait to spend the rest of my life by your side. your love is the most precious gift. I love you so so much baby and thank you harper for this pic," she gushed in the accompanying message.