Floyd Mayweather to Fight Against Logan Paul in 2021

The undefeated boxer is set to fight the YouTube personality 'in a special exhibition boxing match that is expected to make history' which will happen in early 2021.

AceShowbiz - Floyd Mayweather, Jr. is set for a showdown with Logan Paul. The former professional boxer, who has not been fighting in an exhibition for two years, confirmed that he will make a return to the ring for a match against the YouTube sensation in February 2021.

The 43-year-old took to Instagram on Sunday, December 6 to make the exciting announcement. "Super Exhibition Feb. 20, 2021 !!!! Early Bird Special On Sale NOW!!!! @fanmio More Details Soon. Link in BIO..," he declared alongside a clip of his picture standing side by side with the Internet personality's.

The news about Floyd and Logan's match was first brought up by YouTuber Keemstar, whose real name is Daniel Keem, back in September. However, he reported at the time that the boxing battle would be happening "this year." He further cited a previous report by Mike Feinberg of The Fighting News.

"I've got some breaking news for you. Floyd Mayweather Jr is coming out of retirement and has just officially signed a contract to fight in an exhibition match against Logan Paul - YouTube sensation Logan Paul," Mike said in the clip. "I don't understand the fight. Logan Paul has tried his hand at professional boxing - couldn't beat the other nobody [that] nobody's ever heard of before."

"[Paul's] now 0-1. He's going to be fighting one of the best in Floyd Mayweather. It's going to be a joke of a fight, but it's signed. It's official," he continued. "I heard it from a reputable source today and even saw the signed picture of the signed contract where Floyd signed on the dotted line for this exhibition match."

Logan himself initially called out Floyd when pressed about the possible match between the two during an outing. "If I caught Floyd with one punch - one punch - I would snap this f**ker in half. If I caught Floyd in a real fight, street fight, whoop his a**! No question," he bragged in a clip obtained by TMZ in November.

Reacting to Logan's statement, Floyd slammed the older brother of Jake Paul on Twitter. "These YouTube girls better find some Barbie dolls to play with cause I'm not the one for the kid games. 3 years ago a fighter from the UFC said my name and I had to put a muzzle on that bitch. @loganpaul can get the same treatment before I go conquer Japan again," he tweeted. 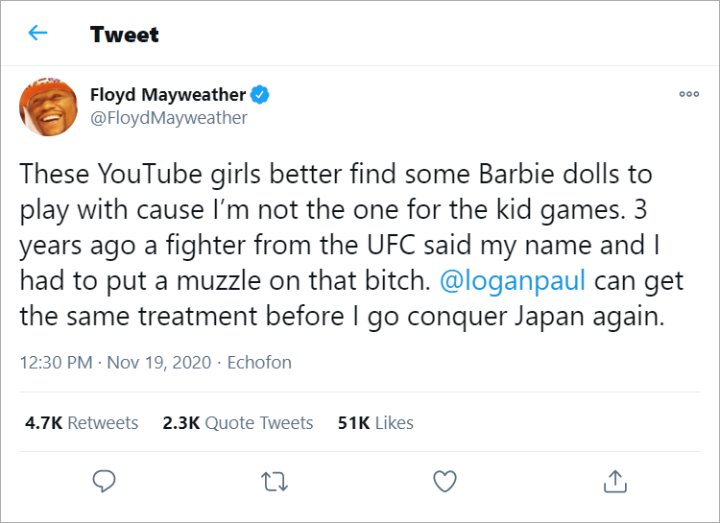 Floyd's last match was an exhibition against Japanese kickboxer Tenshin Nasukawa back in December 2018.

JT Apologizes for Past Colorist Tweet: 'I Probably Was Arguing Back Then'