In her loving tribute, the 'Don't Wanna Lose You' hitmaker reveals that Ron 'Bear' Jones was the guy behind the wheel when she was involved in an infamous March 1990 crash.

AceShowbiz - Gloria Estefan has paid tribute to her longtime tour bus driver after revealing he died due to complications of COVID-19.

Ron 'Bear' Jones passed away last week (ends December 04), and the singer, who fought the coronavirus earlier this year, has called him "one of the sweetest, most loving humans that I've had the privilege to know" in a heartfelt Instagram post, revealing he was the guy behind the wheel when Gloria was involved in an infamous March 1990 crash.

"He was my favorite tour bus driver and was driving us on March 20, 1990 when we had a horrific accident while on the Cuts Both Ways tour," she writes. "He rode in the ambulance with me to the hospital holding my hand even though he was severely injured himself. He drove us on every tour after that including my final world tour in 2004..."

"May he rest in peace in the knowledge that he was well loved & respected and we will miss him a lot on this earth. My sincerest condolences to his family and all who loved him," the "Don't Wanna Lose You" singer continued paying her respect. 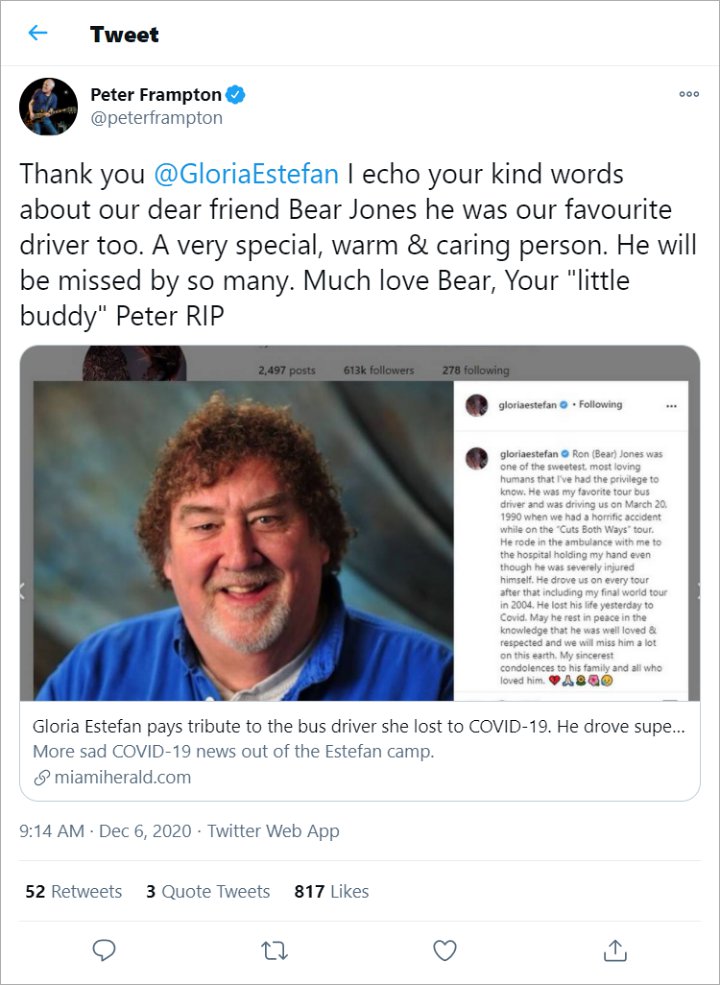 Rocker Peter Frampton, who was also a friend of the bus driver, added a tribute to him via Twitter on Saturday (December 05), writing, "Thank you @GloriaEstefan I echo your kind words about our dear friend Bear Jones he was our favourite driver too. A very special, warm & caring person. He will be missed by so many. Much love Bear, Your 'little buddy' Peter. RIP."