Around the same time the TV personality confessed she feels like a failure for the devastating loss, her husband Steve Hunsberg shares on social media a letter he wrote for their late son.

AceShowbiz - Ashley Spivey has suffered a devastating loss. Around four months after announcing that she and husband Steve Hunsberg were expecting a baby boy, the season 15 contestant on "The Bachelor" dropped heartbreaking news about the death of their son before his birth, and revealed what had caused it.

On Wednesday, November 25, the 36-year-old informed her followers via an Instagram Story post. "We delivered Christoper James at 4:27. Like his namesake, my Dad, he was taken too early from us, his death a result of the cord being wrapped around his neck," she revealed. "He is absolutely beautiful with my eyes and dark hair and Steve's nose and lips. We are devastated by this loss."

Hours earlier, Ashley used a series of Stories to "give some insight into the worst day" of her life. She began by mentioning that her doctor appointment was great since baby CJ's "very strong" heartbeat could be heard. She added, "The doctor asked if CJ was moving around a lot but I said he had kinda slowed down in the past week and wasn't kicking the hell out of me at night. I loved it. It was our night bonding."

Ashley then noted that her worry started to form after she left the office when her regular doctor said "she wasn't worried but I should get a sonogram at the hospital just to make me and her feel better." In a follow-up post, she wrote, "Once I got here they were having trouble finding the heartbeat so they did two ultrasounds with two different doctors - but the result was the same. CJ died sometime between my dr visit and my hospital visit."

Ashley went on to reveal that following the pregnancy loss, she was given an epidural and Pitocin "in hopes that I will be able to deliver him relatively quickly." She added, "I am very sad and very scared but more than anything, I am just completely heartbroken. I feel like a failure. I am going to try and get some sleep and tomorrow I will get to meet my sweet CJ. I'm so sad that I couldn't protect him." 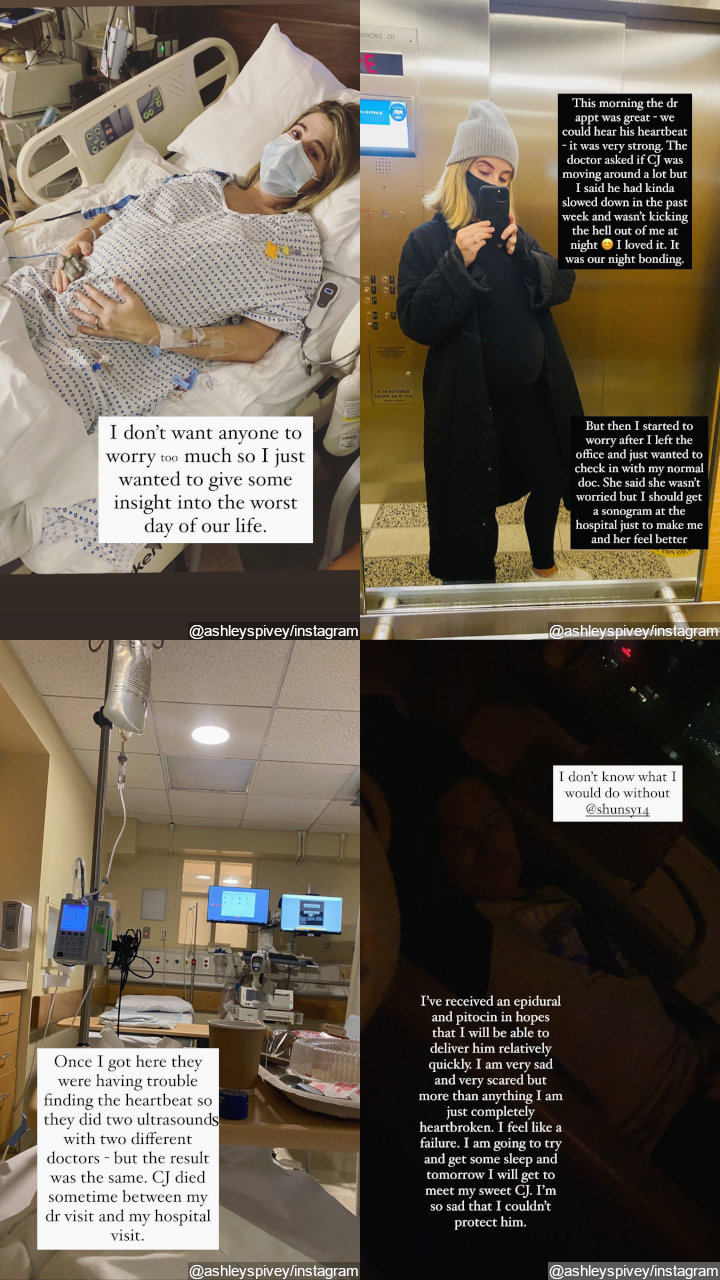 Also grieving over the loss was Ashley's husband, Steve. He posted a letter he wrote for their late son that read, "I hope that you grow to love these songs as much as we do. Music has a way of growing you in comfort and love. It even can empower you. I can't wait to meet you and watch you grow with a family that has waited a long time for your arrival." He captioned the post, "The world took a step back today."

The tragic news came four months after Ashley told her Instagram followers, "I am having a boy." In a July post, she added an accompanying message that read, "I hope y'all are ok with this very low key announcement because this is all you're gonna get."

Unfortunately, this was not the first time Ashley suffered a pregnancy loss. Back in April, she spilled that she was approaching one-year anniversary of her miscarriage. "I wish I had a hopeful post for you today but I don't," she shared on Instagram in honor of National Infertility Awareness Week. "I'm approaching the year anniversary of my miscarriage and I feel even farther away from mom goals than I did back then."

Jonas Brothers Accused of Being Mean to Black Woman