Cuban President Miguel Diaz-Canel has sent condolences to the family of the Havana-born actress after her body was discovered by a resident along the shoreline on Wednesday, November 18.

AceShowbiz - Cuban entertainment industry has been hit with a tragic news. Renowned actress Broselianda Hernandez, whose career in television, film and theater in Cuba had spanned more than two decades, was found dead along the shoreline in Miami Beach, Florida on Wednesday, November 18.

News station WPLG reported that the body of the Havana-born actress was discovered on the beach near 79th Street and Collins Avenue at around 6.30 A.M. by a local resident. While no official cause of death has been released, police believed that she drowned. There were no apparent signs of foul play in her death, but officials are still waiting for reports from the Miami-Dade Medical Examiner's Office.

Broselianda was 56 at the time of her death. She reportedly had been living in Miami for five years before being found dead. Her family, per WPLG, said that she went out on Tuesday night to buy cigarettes. She, however, never returned home from the outing. 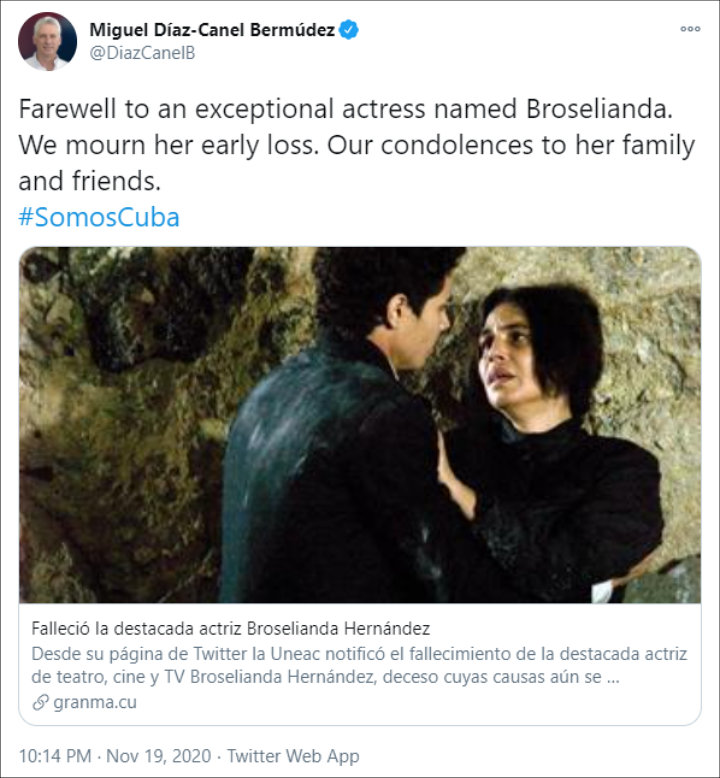 Cuban President Miguel Diaz-Canel tweeted his condolences for the passing of Broselianda Hernandez.

Broselianda made a name of herself through soap operas in the 1990s. Her television credits included "When Water Returns to Land", from which she won best female performance in TV, and "Women of Honor". Her other notable works included Humberto Solas' 2005 movie "Barrio Cuba", Manuel Gutierrez Aragon's 2006 film "Una rosa de Francia" and Juan Carlos Crematay's 2000 movie "Nada".

She took the role of Jose Marti's mother in 2010 biopic about the independence hero, "Marti, the Eye of the Canary". Her final acting credit was as La Madre in "The Companion".

Lori Harvey and Michael B. Jordan Spark Dating Rumors After Traveling Together

Dr. Dre Accused of Trying to Starve Ex-Wife Out Amid Nasty Divorce Battle

Dakota Johnson Hailed for 'Destroying' Ellen DeGeneres One Year Ago