The Republican politician makes a blunder as he incorrectly introduces his rapper supporter when inviting him to take the stage at the MAGA rally in Grand Rapids, Michigan.

AceShowbiz - Donald Trump used the wrong name when introducing one of his rapper supporters Lil Pump at his MAGA rally in Grand Rapids, Michigan on Election Day. The businessman-turned-Republican politician called the rapper "Little Pimp" when inviting the hip-hop star to the podium to deliver a speech.

"Speaking of sounds, music, and other things - One of the big superstars of the world - Little Pimp," Trump said. "There he is. How is it going? You wanna come up and say something?" He later corrected himself, "Come on, Little Pump. Does everyone know who he is? How big he is?"

Wearing a MAGA hat, the rapper greeted the GOP supporters, "Hello everybody, how y'all feeling?" He went on, "I've come here to say, Mr. President, I appreciate everything you've done for our country. You brought the troops home and you're doing the right thing. MAGA 20/20/20. Don't forget that! And do not vote for Sleepy Joe at all!"

Lil Pump, who cursed out Donald Trump in the past, changed his tune as the rapper was angered by Democratic nominee Joe Biden's plan for higher taxes. "F**k I look like paying an extra 33 in tax for Biden. F**k Sleepy Joe," he tweeted as Biden planned to raise tax rates for corporations and people making $400,000 (£307,224) or more per year. 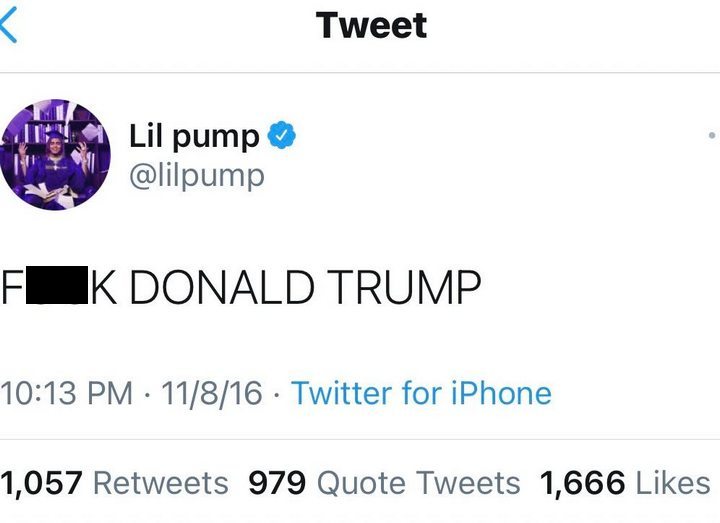 Lil Pump cursed out Donald Trump in the past

He later said in a video that he would move out of the U.S. if Trump was not re-elected. "Yo, no cap... If Trump does not get elected, I'm moving the f*ck out of here n*gga," he said. "I'm going to Colombia, f*ck it."

Fellow rapper Lil Wayne also supported POTUS to continue his presidency as he applauded the MAGA leader for his criminal reform and platinum plan for African-American community. "The platinum plan is going to give the community real ownership. He listened to what we had to say today and assured he will and can get it done," Weezy said.

The so-called "Platinum Plan" was developed based on Ice Cube's Contract with Black America proposal in a bid to solve issues pertaining to the Black community. Ice Cube decided to go with the Republicans because they were willing to act sooner than later. Despite assisting the Republicans, the rapper insisted he didn't endorse Trump as he received backlash.

Report: Trump Admits He Bears 'Some Responsibility' for Capitol Riot