The 'Glee' alum takes to his Twitter account to reveal that his boyfriend, Austin McKenzie, got sick after he accidentally served him an undercooked chicken sausage.

AceShowbiz - Kevin McHale felt guilty after unintentionally making his boyfriend sick with his cooking. On Sunday, August 2, the actor playing Artie Abrams on "Glee" advised Austin McKenzie to break up with him over a recent salmonella poisoning.

Through a Twitter post, the 32-year-old actor first confessed that he accidentally served his actor boyfriend an undercooked chicken sausage, causing the latter to become "superrrr sick". He further spilled that before they figured out the exact cause of the 26-year-old's illness, they mistook it for COVID-19.

"But have you undercooked chicken sausage (unintentionally) and then served it to your bf and then he got superrrrr sick and you thought it was covid and you got tested twice but nah you just fed him salmonella? He should break up with me," Kevin tweeted. "I would."

His tweet has since received some feedback from fans who felt amused by the couple's drama. One of his fans inquired, "Ok, but how do you mistake food poisoning for covid? was he coughing?" Another fan lightheartedly replied, "If I were him I would definitely never eat anything you make again." 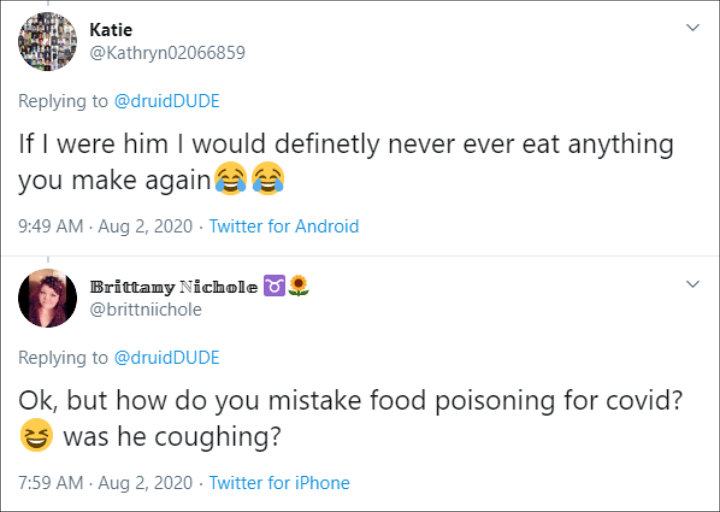 Hours afterward, Kevin shared a screenshot of Austin's updated Twitter bio which read, "I left Twitter years ago. I'm back on now to monitor my thirsty boyfriend, Kevin Mchale, who 'accidentally' gave me salmonella 5 days ago." Along with the screenshot, he wrote, "Omg." He later added, "Guess he woke up from his nap." 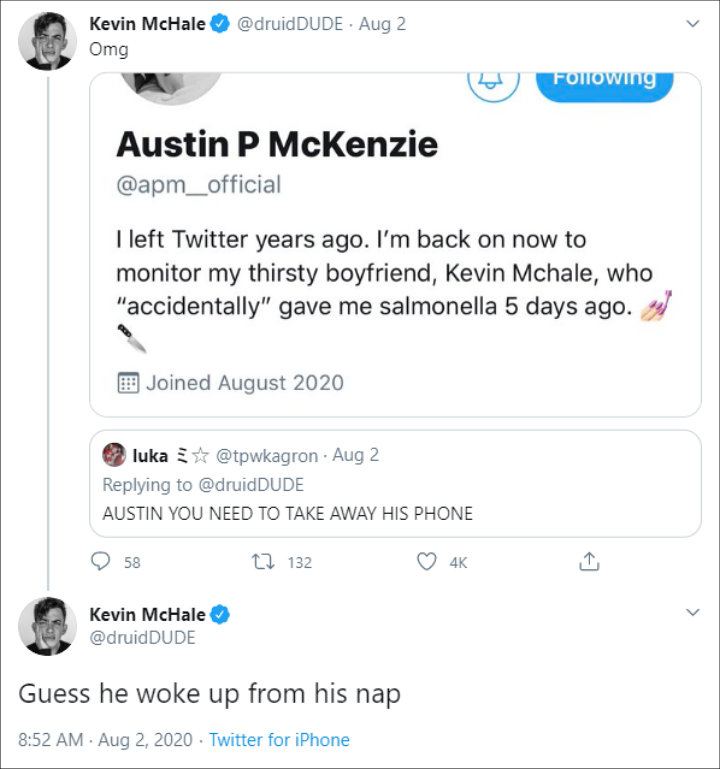 Weeks prior to this post, Kevin mourned the loss of his former co-star Naya Rivera. "My Naya, my Snixxx, my Bee. I legitimately can not imagine this world without you," he wrote on Instagram alongside a black-and-white picture of him and Naya smiling while staring at each other. "I'm thankful for all the ways in which she made me a better person."

"I just hope more than anything that her family is given the space and time to come to terms with this. For having such tiny body, Naya had such a gigantic presence, a void that will now be felt by all of us - those of us who knew her personally and the millions of you who loved her through your TVs," he concluded. "I love you, Bee."

Naya went missing during a boating trip at Lake Piru in Ventura County, California with her four-year-old son, Josey, in early July. After a five-day search, her body was found floating in the water by rangers, and was officially identified as her. Her cause of death was declared accidental drowning.