While the 'Glee' actor remembers his two former co-star as really really good people, fellow castmate Amber Riley shares a heartbreaking video of the late actress singing with her son.

AceShowbiz - Kevin McHale believes his late friend Cory Monteith helped divers find Naya Rivera's body in Lake Piru on what was the seventh anniversary of his death on Monday, July 13.

After her disappearance last Wednesday, authorities finally found a body they believe to be Naya's during a search of a cove in the lake in Ventura County, California.

According to the local sheriff, Naya is believed to have saved her four-year-old son Josey by getting him back onto the boat before drowning herself. Josey was found asleep on the pontoon boat after he and Naya, 33, took a trip out onto the lake earlier in the day.

Following confirmation of her death, Naya's nearest and dearest flocked to social media to pay their respects, with Kevin admitting he thinks Cory had something to do with the discovering of his friend's remains.

"I'm not religious by any means, but you'd be hard-pressed to convince me that Cory didn't help find our girl today," he wrote on Twitter on Monday night.

"These 2, in many ways, were the male and female versions of one another. So nice, cared deeply, were stupidly talented, the most fun, and really really good people." 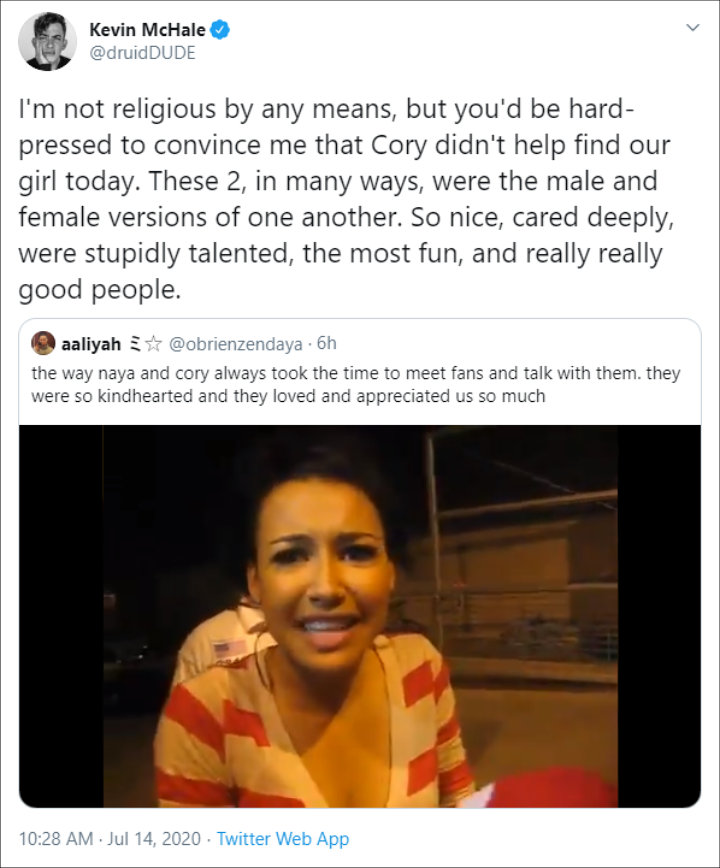 Meanwhile, while many of Naya's "Glee" co-stars shared lengthy tributes on Twitter and Instagram, Amber Riley admitted she was struggling to find the right words to express her emotions at the difficult time, and instead posted a heartbreaking video of the actress singing alongside Josey - her son with ex-husband Ryan Dorsey.

"My favourite duet partner," Amber wrote alongside it. "I love you. I miss you. I don't have words right now, just lots of feelings. Rest In Peace Angel, and know that your family will never have to worry about anything."

Disney+ Teams Up With Lucasfilms to Debut 'Star Wars: The Bad Batch' in 2021