People are bringing up an old picture of the 'Formation' songstress and the 'No Love' crooner, who reportedly became friends when she and Jay-Z had problems in their marriage.

AceShowbiz - People clearly can't get enough of August Alsina and Jada Pinkett Smith's affair drama. Following the actress' confession of her "entanglement" with the much-younger singer, now there's a growing speculation on social media about the nature of August's relationship with Beyonce Knowles.

The internet chatter started after August's photo with Beyonce resurfaced. The two stars became friends in 2014, when the R&B diva reportedly had marriage problems with her husband Jay-Z, who has admitted to cheating on his wife.

"Beyonce was one of the people that I was like, 'Man I'd like to meet Beyonce,' and then it happened so randomly," August once excitedly described his meeting with the former Destiny's Child member. "I went to a concert with Jeezy (Young Jeezy), everybody was drinking and I went to the back and I was looking down at my phone and I guess I just didn't see her, because she was sitting to the side and she was like, 'Well… hello!' And I said, 'Oh excuse the hell out of me, I'm sorry miss lady. How are you doing?' "

August said that he was surprised Queen Bey recognized him and knew his music. "So it was cool that they knew my music, or knew what I've done and respected it enough to say, 'Hey man, we're going to the club, are you coming or not?' " the 27-year-old singer went on recalling.

Now after Jada has admitted to having an affair with August during her breakup with Will Smith, people are speculating about whether or not Beyonce had her own episode of "entanglement" with August. "Jay Z I think Beyonce had an entanglement with August," one quipped.

"Has #Jayz seen this OR she can explain," a second user tried to notify the Roc Nation founder of Bey and August's relationship. "i just pray beyonce at least had her own 'august alsina' moment . amen . f**k jay z. amen again," another wrote. 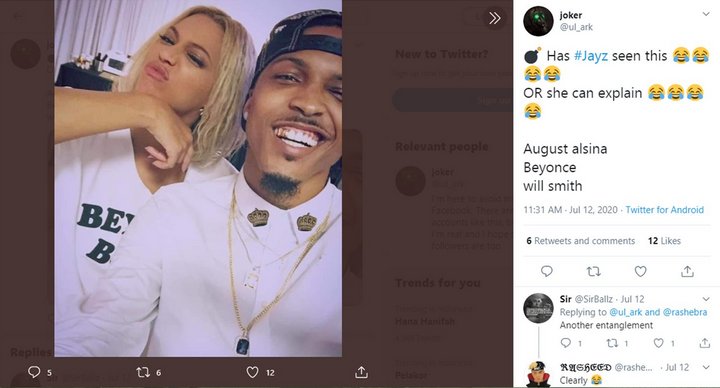 A Twitter user reacted to Beyonce and August Alsina's photo.

"I'm sure people who were involved August are starting to get worried. First it was Jada then Keke (Keke Palmer) now Beyonce. Who's next?" commented a fourth Twitter user.