While many deem the 'Cuts Like a Knife' singer's social media rant racist, a few jump to his defense by pointing out that he did not mention China in his post and was only promoting vegan.

AceShowbiz - Bryan Adams has caused quite a controversy with his social media post about the coronavirus pandemic. On the morning of what was supposed to be the start of his Royal Albert Hall residency in London, the "(Everything I Do) I Do It for You" hitmaker vented his frustration online by blaming it on wet market vendors, and drew mixed reactions from the Internet.

On Monday morning, May 11, the 60-year-old posted on Instagram a video of him covering his 1983 hit "Cuts Like a Knife". Along with it, he shared his controversial thought, "Tonight was supposed to be the beginning of a tenancy of gigs at the @royalalberthall, but thanks to some f**king bat eating, wet market animal selling, virus making greedy bas***ds, the whole world is now on hold, not to mention the thousands that have suffered or died from this virus."

"My message to them other than 'thanks a f**king lot' is go vegan," the singer continued. "To all the people missing out on our shows, I wish I could be there more than you know. It's been great hanging out in isolation with my children and family, but I miss my other family, my band, my crew and my fans."

The Grammy winner further urged fans to take care of themselves, and expressed his hope to be back on the road anytime soon. "I'll be performing a snippet from each album we were supposed to perform for the next few days," he concluded the post attaching a number of hashtags that included "#covid_19", #banwetmarkets", "#selfisolation" and "#govegan".

Many have since deemed his online rant racist. "BRYAN ADAMS: Multiple musical notes wrote my first real racist tweet / my career already in decline / blaming the Chinese for my lack of income / was the summer of COVID one-nine," one critic tweeted. Another chimed in, "Bryan Adams and I share the same hometown, Vancouver, home to a very large and varied population of Asians. #Covid_19 is amplifying anti-Asian racism there looks like @bryanadams is part of the problem." 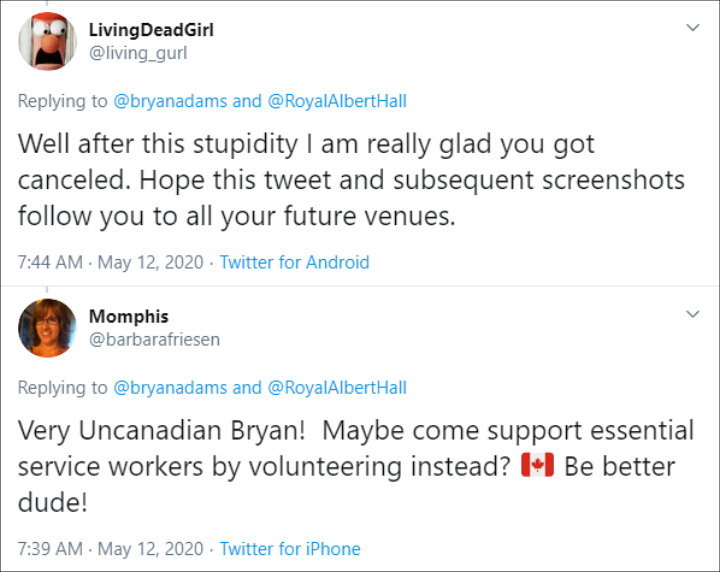 Others voiced their anger at Adams' post. "Well after this stupidity I am really glad you got canceled. Hope this tweet and subsequent screenshots follow you to all your future venues," one commented. Another one, in the meantime, urged him to be a better Canadian by writing, "Very Uncanadian Bryan! Maybe come support essential service workers by volunteering instead? Be better dude!"

A few, however, stood by Adams' side. One, in particular, pointed out, "I'm not saying it's ok, but everyone labeling Bryan Adams as racist needs to read the tweet. No race is mentioned. No nationality is mentioned. At worst it's just insensitive to the current situation. You're more racist for mentally attaching it to China." Another one chose to focus on Adams' vegan message by noting, "You see it's okay, Bryan Adams wasn't doing a racism he was just being a vegan." 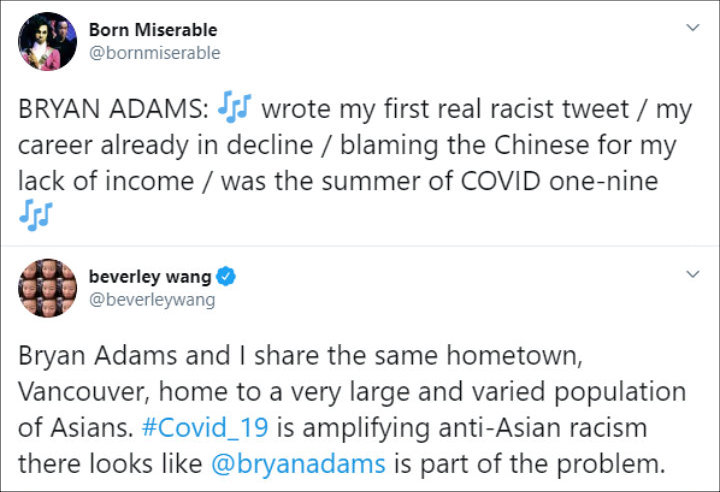 Adams had also shared his rant in a series of Twitter posts, but deleted them after many took issues with them.