The 50-year-old 'Grey's Anatomy' actress sparks backlash as she is accused of victim blaming after a video of her making an appearance in an hour-long Oxford Union Q&A resurfaced online.

"For those who feel offended or are taking this personally this panel was 2 + years ago and it was way before the whole stories of the women came out," Ellen wrote to one user. "I certainly didn't know he was a rapist at that point … that took s**t to a whole different level." 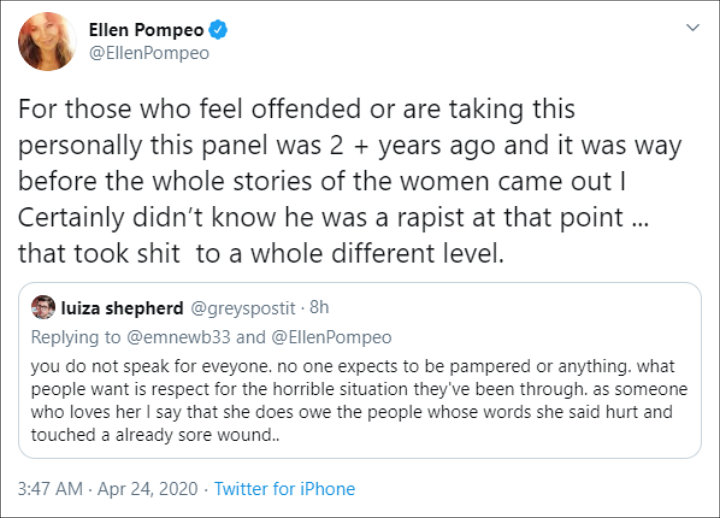 Ellen Pompeo claimed that her controversial comments were taken out of context.

In a separate tweet, Ellen said, "And... I'm talking about harassment... not assault. Two different things. I was speaking about MY experience of being harassed in Hollywood and my outlook on it."

"for years before times up women had to put up with harassment and still do on a regular basis ...it was just part of the job as it is in a lot or all professions ...we couldn’t complain like we can now. If we complained we would be out and the man would stay," she added.

Sharing that her "way of coping w/ whatever situations I've been in is not a comment on how other women handle things," Ellen went on to say, "again Thank God we can speak up now but once again assault and harassment are different both bad but different. Not sure of harassment is seen by law enforcement as a crime."

Concluding her explanation, she wrote, "Okay so I was just told The Times story was out before this but I didn’t read it ... I only was really following the story on the news once the trial began."

This arrives after the 50-year-old actress was accused by many of victim blaming after a video of her making an appearance in an hour-long Oxford Union Q&A resurfaced online. During the discussion, she talked about women who might have found themselves in compromising positions with Weinstein. "I think we bear some responsibility, not all, but it takes two to tango for sure," she said at the time.

Ellen, however, clarified that she was in no way blaming the victims. "That's not to blame the victim, that's just to say -- I did go into a room with Harvey Weinstein, I sat at a table with him, I had a probably two and a half hours with him," so she continued. "He never said anything inappropriate to me, he never made any sort of physical advance to me."

Ariana Grande Feels Offended by TikTok Impersonations of Her