Stuck at home because of the coronavirus pandemic, the 'Transformers: The Last Knight' actor is filmed by his wife, Felicity Blunt, when giving a step-by-step guide on how to make the beverage.

AceShowbiz - Stanley Tucci has charmed the Internet with his skills in making cocktail. As most people around the world have to stay at home because of the coronavirus pandemic, the "Transformers: The Last Knight" actor offered a refreshing entertainment by transforming himself into a bartender to give a tutorial on how to make Negroni.

An Instagram video posted on Monday, April 20 saw the 59-year-old actor first telling his wife, Felicity Blunt who is also the elder sister of actress Emily Blunt, that he will be making a Negroni. Wearing a tight black shirt, he went on to calmly share his step-by-step guide in making his version of the classic cocktail.

In the three-minute video, the actor playing Nigel Kipling in "The Devil Wears Prada" informed viewers that they could substitute the gin with vodka. He then added blocks of ice, a double shot of gin, a shot of "good sweet vermouth" and a shot of Campari into a cocktail shaker, and gave it a good shake.

Once he was done shaking, Tucci showed off his choice of glass. "I put it in a coupe, like that, but you can put it in a martini glass, or whatever you want," he noted, before squeezing a sliced orange into the beverage. He did not forget to garnish the drink with the sliced orange as well.

Being playful, "The Hunger Games" actor teased his wife who stretched her hand from behind the camera to take the glass. "You want it, Felicity?" he asked before adding, "That will never happen." He proceeded to take a sip of the cocktail, and told her, "That's good."

Tucci's simple tutorial has quickly gone viral. It even caught the attention of his Marvel Universe co-star, Chris Evans, who reposted his video on Twitter. "I. Love. Stanley. Tucci," the latter wrote along with the clip. "On some(most) days after we finished filming on the first Captain America movie, Stanley would make us martinis in his trailer." 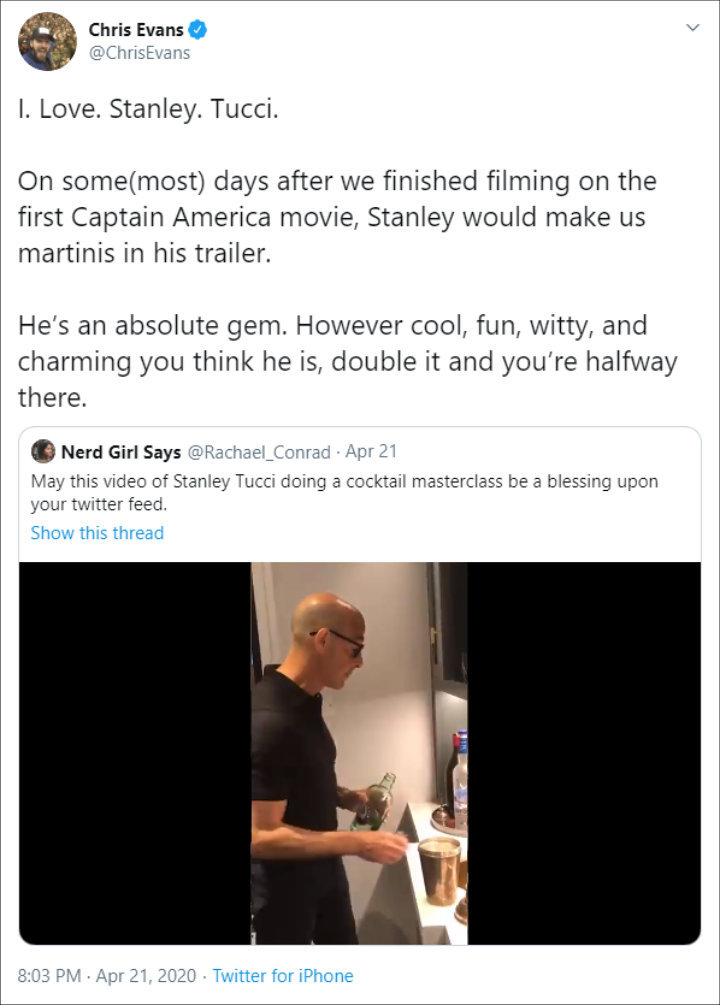 Evans went on to praise the Academy Award-nominated actor in the same post. "He's an absolute gem," the younger actor noted. "However cool, fun, witty, and charming you think he is, double it and you're halfway there."