The 'Final Destinanation' actor previously garnered negative reactions when he revealed he stepped out of self-isolation during the epidemic to shop at Barnes and Noble.

AceShowbiz - Actor Devon Sawa has hit back at social media trolls after facing criticism for shopping at a Los Angeles bookstore instead of remaining in self-isolation.

The "Final Destination" star has been laying low at home with his wife and two children amid the global coronavirus pandemic, which has led to authorities worldwide advising people to stay indoors and avoid non-essential outings to curb the spread of COVID-19.

Los Angeles is one of the big cities placed on a partial lockdown to encourage residents to engage in social distancing, but Sawa took to Twitter on Tuesday, March 17 to document a trip to a Barnes & Noble bookstore, where he crossed paths with fellow actor Julia Roberts.

Confessing he had been left star-struck, he tweeted, "I just stood in line with Julia Roberts at Barnes & Noble and wanted to tell her so bad how amazing she is at what we do. But I didn't. Im a big chicken (sic)."

Devon Sawa tweeted about standing in line with Julia Roberts.

However, followers were quick to attack Sawa for risking the health of himself, his family and others by stepping out of self-isolation unnecessarily, prompting the 41-year-old to explain the reason for the impromptu visit.

"To the people b**ching I went to a nonessential store today," he began.

"My daughter's birthday is Saturday. We already canceled the party. Now they're (suppliers are) not delivering the bed we got her and amazon may not bring her presents. - I went to B&N to get her a gift."

Making it clear he didn't care for the criticism, he added, "Also go f**k yourself". 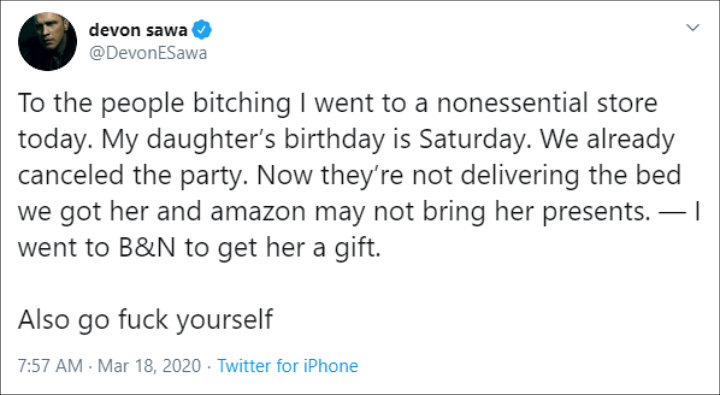 He joked about doing movie's scene in his real life.

"Final Destination was released 20 years ago today," he posted. "Remember that scene in the movie where I quarantined myself in that cabin so death couldn't get me? I'm doing that right f**king now, in real life!".

Devon Sawa Credits Christina Ricci for 'Casper' Role: I Owe Her the World