The 'Keeping Up With the Kardashians' star has found herself under fire as fans branded her hypocrite following her impassioned plea in light of the ongoing bushfires in Australia.

AceShowbiz - Khloe Kardashian was branded a hypocrite by fans on social media after insisting the fur coat she wore at Halloween was not made from animal materials.

The 35-year-old reality star came under fire after she claimed the world needs to "wake up" and "save the animals" as she made an impassioned plea in light of the ongoing bushfires in Australia.

However, the "Keeping Up with the Kardashians" star's words didn't sit well with fans, with one sharing a post of Khloe's Halloween costume - in which she had dressed as Disney villain Cruella De Vil - claiming that the star was already killing animals with her choice to wear fur.

" 'Oh my God, 500 million animals have died!' Which is what, a few less than for your fur coats and accessories, @khloekardashian?" the commenter penned.

After seeing the post, Khloe slammed the user, writing, "I am wearing a Halloween costume. It's not real fur. But keep spreading your vile hate instead of focusing on real issues." 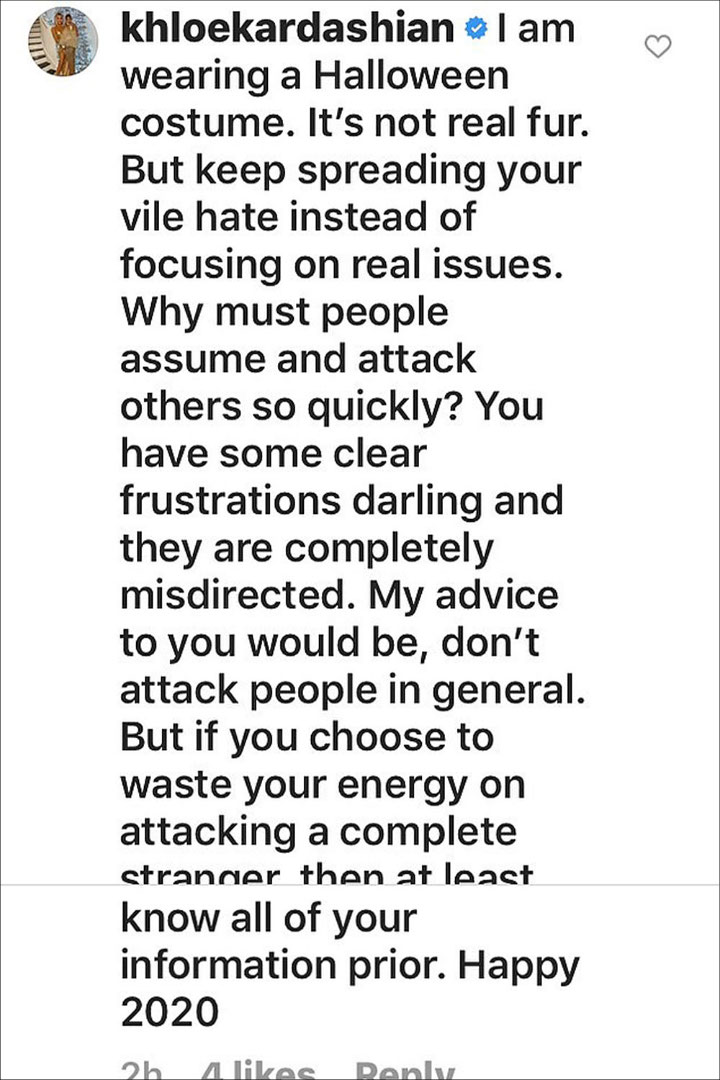 But devoted fans soon recalled a 1 November (19) post from an account named Daniel's Leather, where the designer of Khloe's outfit claimed that fox and mink fur had been used in the ensemble.

"@khloekardashian came to me with this vision i knew it will not be an easy task but i am so glad that the final product came out perfect," they posted alongside a snap of the outfit. "Also wanna thank @janellermiller for her help in this imp project . I am so proud Of the fact that anytime it's a huge project people always approach daniels leather. (sic)"

Orlando Brown Beaten Up and Kicked Out of House

Mya Finally Reveals Whom She's Married to in Wedding Video