The 'Mom' star feels 'very fortunate' that her family was saved after carbon monoxide leaked at a vacation home in Lake Tahoe she rented during the holiday weekend, resulting in two people going to the hospital.

AceShowbiz - Anna Faris has a Thanksgiving to remember. The leading lady of CBS sitcom "Mom", revealed on Friday, November 29 that she and her family have survived a scary encounter with carbon monoxide poisoning.

Turning to Twitter one day after the holiday, the ex-wife of Chris Pratt described the incident as "a stupidly dramatic story." Nonetheless, she couldn't help but "feeling very fortunate." Along with a photo of a set dining room table, she also expressed gratitude to the first responders. "I'm not quite sure how to express gratitude to the north Lake Tahoe fire department," she wrote. 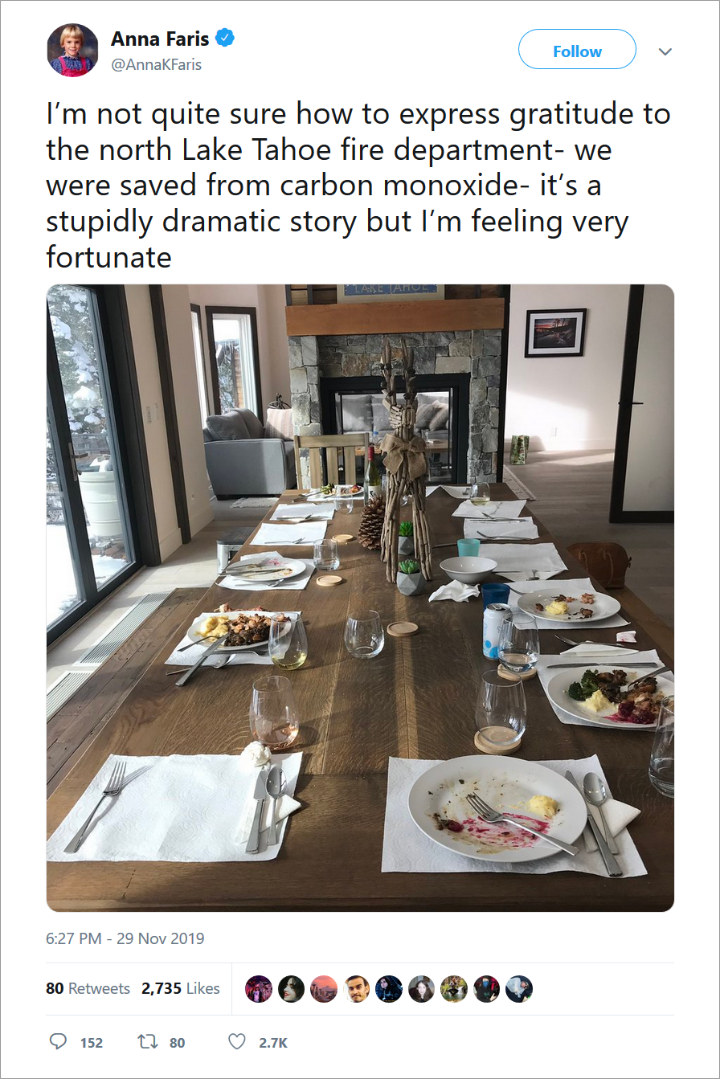 The incident took place when Anna and a group of 12 family members went to Lake Tahoe, California to celebrate Thanksgiving. In a press release, the North Tahoe Fire Protection District detailed that all 13 of them began to fall ill to "varying degrees" after they arrived at a rented vacation home. Initially, they blamed altitude sickness for it.

When two family members finally decided to seek treatment at local hospital, they were diagnosed with carbon monoxide poisoning. First responders were immediately alerted to check on the remaining family members back at the rental home. Two others were taken to hospital for further care, while the other nine were treated on site.

North Tahoe Fire Chief Mike Schwartz further weighed in, "We are so thankful to report that this holiday disaster was averted." He went on to remind others the importance of situational awareness. "Whether you are at home or traveling, it is important ensure that smoke and CO alarms are in working order anywhere you stay," he stressed. "It's not a bad idea to consider bringing your own alarm when you travel, just to be safe."