The cause of death is yet to be announced, but The Athletic writer Pete Sampson claims in his tweet that the ex-running back was dealing with depression since the death of his twin brother in 2018.

AceShowbiz - Super Bowl champion George Atkinson II has lost another son. Around a year after Josh Atkinson died of suicide, news broke out that his twin brother, former NFL player George Atkinson III, has passed away at the age of 27.

The tragic news was first brought to attention by The Athletic's Pete Sampson on late Monday night, December 2. Through his Twitter account, the writer grimly announced, "Former Notre Dame running back George Atkinson III has died." 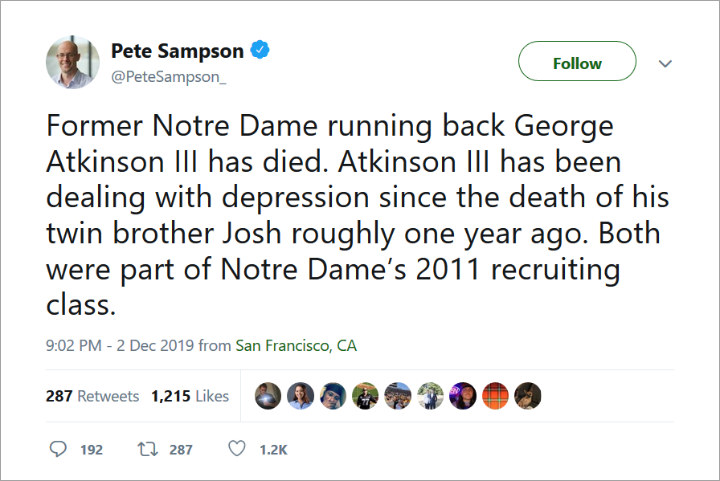 While George's cause of death remained disclosed, Pete suggested that mental health might play a part. "Atkinson III has been dealing with depression since the death of his twin brother Josh roughly one year ago," he noted. "Both were part of Notre Dame's 2011 recruiting class."

Back in October, George opened up, via The Unsealed, about dealing with the losses in his life. In an open letter addressed to "kids facing tough times," he confided about their mother who suffered from paranoid schizophrenia, and how her death from complications from Crohn's disease affected his brother.

"On Christmas Eve, [Josh] went missing," the former Notre Dame running back remembered. "Through the GPS in his car we found him. Drunk and upset, he was on the verge of driving to the bridge and doing something stupid."

"He said he felt guilty because we pulled the plug on our mother's life support. I told him it was our decision. I reassured him no one is blaming nobody and to snap out of it because it was in God's hand. I calmed him down and took him home," the ex-Oakland Raiders player detailed. "The next day he hanged himself."

George went on to note that Josh's passing put him in a real dark place. "That's the moment I felt like I lost everything. That's the moment I can't describe. I never want you to feel his pain or my pain," he wrote. "I was 5150'd - forced into the same institution my mom was once in because I, too, tried to harm myself."

Sharing how he pulled himself out of the slump, the former professional footballer credited his two-year-old daughter. "I knew I had to find a way to keep going and be a role model for her," he pointed out. "Without my daughter, I don't know where I would be right now. She gave me that second wind of motivation."

B. Simone Snuggling Up to DaBaby in New Clip Following Thirsty Posts

Dr. Dre Goes All Black When Returning to Studio One Day After Hospital Release