Meanwhile, other Twitter users have come to the 'Space Cowboy' hitmaker's defense against the online troll, who calls out the singer after she admits she was overwhelmed working on her Christmas special.

AceShowbiz - Kacey Musgraves has adopted a positive attitude towards bully. Unlike many celebrities who have hit back when they got attacked online, the "Merry Go 'Round" singer got sarcastic and agreed with a troll who criticized her personality.

On Sunday, November 24, the 6-time Grammy winner received a hate speech from one particular Twitter user that read, "I liked your music but your personality seems sh**ty." Hours later, she came out with one hilarious reply that simply read, "it is."

While the "Rainbow" singer made no other comment regarding the matter, her followers were quick to come to her defense. One user under the account of @jaypoltwit wrote back, "Based on what? Everything I've seen is to the contrary. Kacey seems like a salt of the earth type of person and she loves to interact with her fans. She speaks her mind about issues she cares deeply about. What's not to like?"

Another account, @m64mcbride, responded, "At least she has a personality. I'm so sorry you have to endure such an awful life. I would never wish that for anyone, so I hope things turn around for you soon." A third user, @reddirtpoets, retorted, "Well that was unnecessary and totally reveals your personality."

The trolling tweet itself came as a response to Kacey's admittance that her work for "The Kacey Musgraves Christmas Show" has taken a toll on her. Along with a series of photos from the set, she tweeted, "Fighting exhaustion, practicing a strum pattern, getting hair and makeup done, getting my busted a** feet fixed, and trying to maintain a sense of Christmas cheer in between takes on the 6th day on the set of the Kacey Musgraves Christmas Show in an 85 degree metal building." 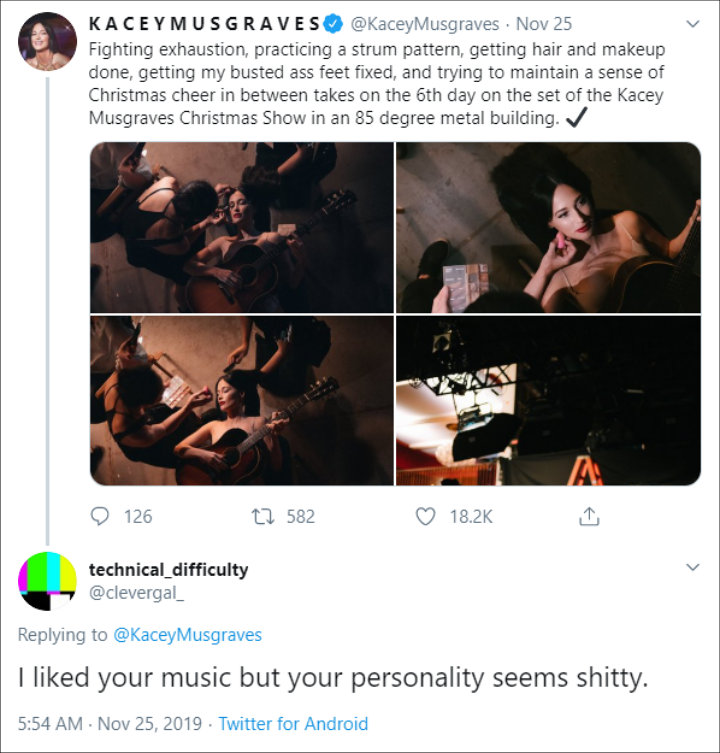 Described as "a nostalgic, Wes Anderson-inspired reimagining of the holidays," Kacey's first holiday special is set to premiere on Amazon Prime Video on November 29. It will feature an appearance by Camila Cabello, Lana Del Rey, Kendall Jenner, Troye Sivan, Zooey Deschanel as well as comedians James Corden and Fred Armisen.