will.i.am Slams 'Racist' Flight Attendant who Called the Cop on Him

The Black Eyed Peas star defends himself on Twitter when he's criticized for posting his story on social media and publicly naming the Qantas flight attendant.

AceShowbiz - will.i.am believed he was targeted by a Qantas flight attendant because of his race. The Black Eyed Peas star expressed his frustrations on Twitter after the female flight attendant called the police on him while he was en route from Brisbane to Sydney.

"I'm sorry to say me and my group have experienced they (sic) worse service due to a (sic) overly aggressive flight attendant...," the hip-hop star told his followers. "I don't want to believe she racist. But she has clearly aimed all her frustrations only at the people of colour."

He posted a picture of the cop and named the flight attendant in his follow-up tweet, "This is how your (sic) greeted when you land from Brisbane to Sydney flying @qantas with a #RacistFlightattendant named Lorraine Marshall." He added, "She sent the police after me bacause I couldn't hear the P.A while making beats on the plane wearing noise canceling headphones..." 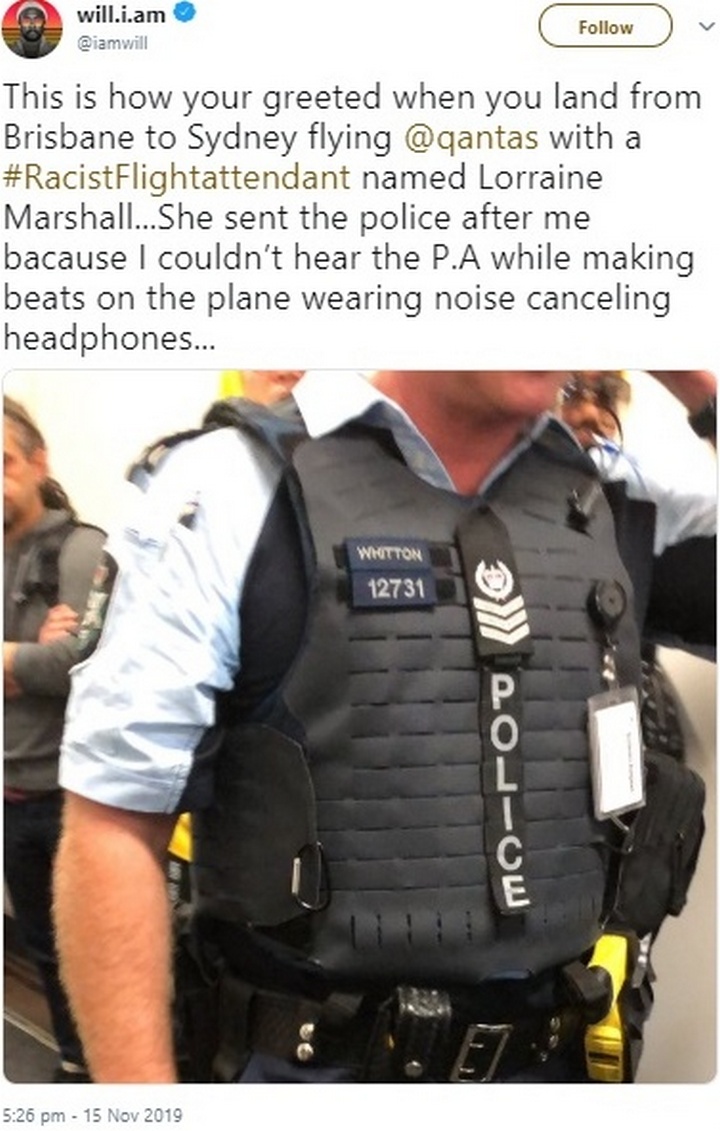 He then tagged Qantas to complain, "@Qantas Your #RacistFlightattendant was beyond rude & took it to the next level by calling the police on me." He was eventually let go after the other passengers testified in his favor, "Thank god the other passengers testified that SHE was out of Control. The police finally let me go. Imagine if the police were as aggressive as Lorraine Marshall."

When a Twitter user said the flight attendant was just doing her job, will.i.am disagreed. "I'm sorry? Is callin the police on a passenger for not hearing he (sic) P.A due to wearing noise canceling headphones appropriate?" he argued. "If didn't put away my laptop 'in a rapid 2min time' I'd understand. I did comply quickly & politely, only to be greeted by police. I think I was targeted."

The 44-year-old musician denied accusations that he ignored the safety briefing. "I was paying attention...I put on my headphones 20min into the flight..:thanks...," he replied to another person that criticized him.

When an Australian reporter slammed will.i.am for suggesting the woman was a KKK supporter, the rapper wrote, "No one said she was a white supremest... I said she singled every person of colourbin (sic) the flight and gave them a hard time...and went to the extreme of calling the police on me when I did nothing wrong...other passengers on the flight agreed that she was out of hand..."

The reporter then accused the star of subjecting the woman to intimidation and abuse by posting the story online, but Will argued that he, too, was intimidated and abused. "I was intimidated by 5 police officers when I landed...for what?" he penned. "I put away my laptop when she asked...why would she feel threatened by me to call the police? What did I do wrong? I wasn't out of hand.. I was polite & did what she asked... now you're asking me to take abuse?"

He added in another tweet, "I am posting so that this doesn't happen again...it shouldn't happen to a Aboriginal, Latino, African, LGBTQ White, Red or anyone... everyone deserves to be treated with respect..."

When he was told to file a proper complaint, he responded, "This is me filing a 'proper complaint'...this way I know my complaint & treatment will be heard...I'm using the same tool you would use if you were wrongly accused of doing something & pulled away by police officers. I still don't know what I did wrong for police to come."

When he was shown an evidence of his fans attacking the flight attendant online following his story, will.i.am quickly sent this message to his followers, "Please do not send Hate...This type of disrespect and name calling is uncalled for...I don't support abuse & attacks like this...I hope that everyone can be more compassionate & understanding towards one another...because it was the lack of compassion that caused this #noH8." 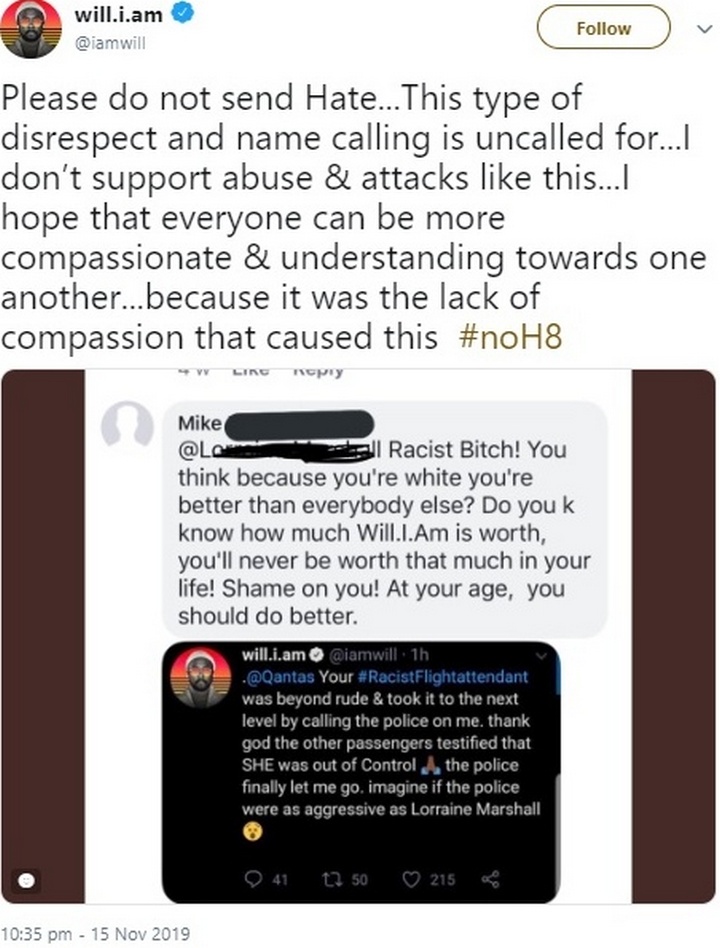 "I don't wish any harm to anyone...I just everyone to be respected and treated with dignity... the last thing I want is for someone to be in harms way..."

To those criticizing him for naming the flight attendant, will.i.am argued, "If I did something wrong....or if I was the slightest bit rude to a FAN or a journalist during work, I would be publicly named...this is what Twitter is for...we are supposed to call out wrong doings so we can have a safer more compassionate world."

"I don't regret my actions of taking to public to speak for the other for those who don't have the voice who felt the same disrespect... I am saddened that People chose to spread hate and attack... there were other people on the flight were disrespected," he wrote.

will.i.am Turns Vegan After Being Diagnosed With Chronic Hearing Condition