Drake Hits Back After Dad Claims He Lied 'to Sell Records': He Couldn't Accept Being Absentee Father

The Canadian rapper writes on Instagram Stories that he's 'so hurt' by his father Dennis Graham's accusations that he made up lyrics about their strained relationship in his songs.

AceShowbiz - Drake has clapped back at his father Dennis Graham after the latter claimed his son lied about their relationship for money. On Tuesday, October 8, four days after his father's interview on Nick Cannon's Power 106 show "Close Conversations", the "In My Feelings" hitmaker took to his Instagram page to respond to the accusations.

"Woke up today so hurt man," the Canadian spitter posted on Instagram Stories. "My father will say anything to anyone that's willing to listen to him. It's sad when family gets like this but what can we really do that's the people we are stuck with..." Insisting that what he says in his songs is the truth, he added, "every bar I ever spit was the truth and the truth is hard for some people to accept." 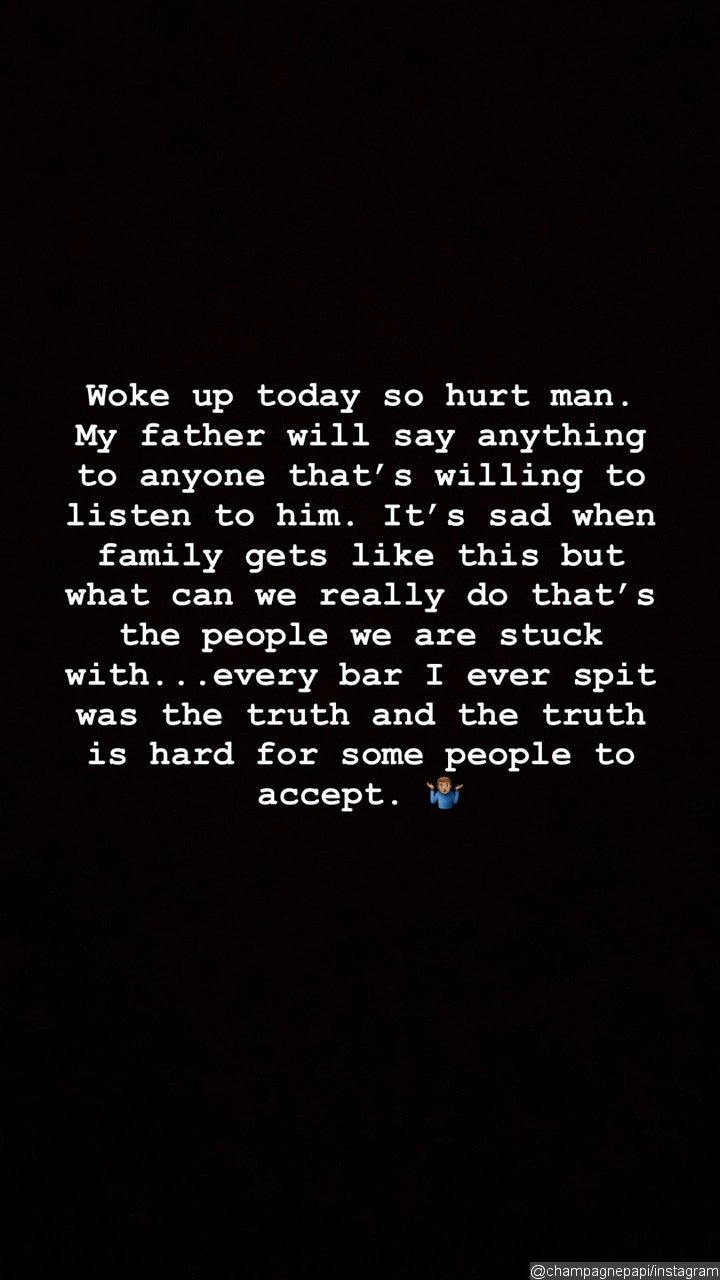 Drake hits back after father claimed he lied about strained relationship 'to sell records.'

On Friday, October 4, Dennis said when asked by Nick about his complicated relationship with his son, which Drake often portrays in his songs. "I had a conversation with Drake about that. I have always been with Drake," Dennis said, denying that he was an absentee father.

"I talk to him if not every day, every other day. We really got into a deep conversation about that. I said, 'Drake why are you saying all of this different stuff about me, man? This is not cool.' And he goes 'Dad, it sells records,' " Dennis went on claiming. "I exposed him to every aspect of life. I never hid anything from him … I showed him this side of life. I showed him that side of life."

Drake's songs like "0 to 100" and "Look What You've Done" feature lyrics that portray his father as someone who wasn't around, breaking promises and not paying child support. "And my father living in Memphis now, he can't come this way/ Over some minor charges and child support/ That just wasn't paid, damn/ Boo-hoo, sad story-Black American dad story," he raps in 2011's "Look What You've Done" off his album "Take Care".

Drake and Future Hint at 'Life Is Good' Collaboration

Drake Held Off Announcing His Son Because of Ruined Paternity Test