Jeremy O. Harris, who is making his Broadway debut with the critically-acclaimed show, takes to Twitter to explain why he delayed the production's start time for the 'Umbrella' hitmaker.

AceShowbiz - Rihanna was defended by the writer of Broadway's "Slave Play" after arriving late and texting during the production.

The singer enjoyed a night out at the Golden Theatre in New York on Saturday, September 14, for a preview of the often graphic show ahead of its opening night on 6 October. But her busy lifestyle meant that Rihanna arrived 15 minutes late to the show, with its beginning held for her arrival.

The 31-year-old also sparked a backlash from her fellow audience members after she was spotted texting and using her phone throughout the play.

However, playwright Jeremy O. Harris, who is making his Broadway debut with the critically-acclaimed show, quickly took to his own Twitter page to defend the "Umbrella" star, who he had called his "idol" in a previous tweet.

"I'm not interested in policing anyone's relationship to watching a play ESPECIALLY someone who isn't a part of the regular theatregoing crowd," he wrote. "Moreover, as ppl (people) on this site know I'm famously ambivalent abt (about) phone use in theatre."

"For me there are so many more disrespectful things that I have to endure in a theatre than light from a phone so I've come to terms with it." 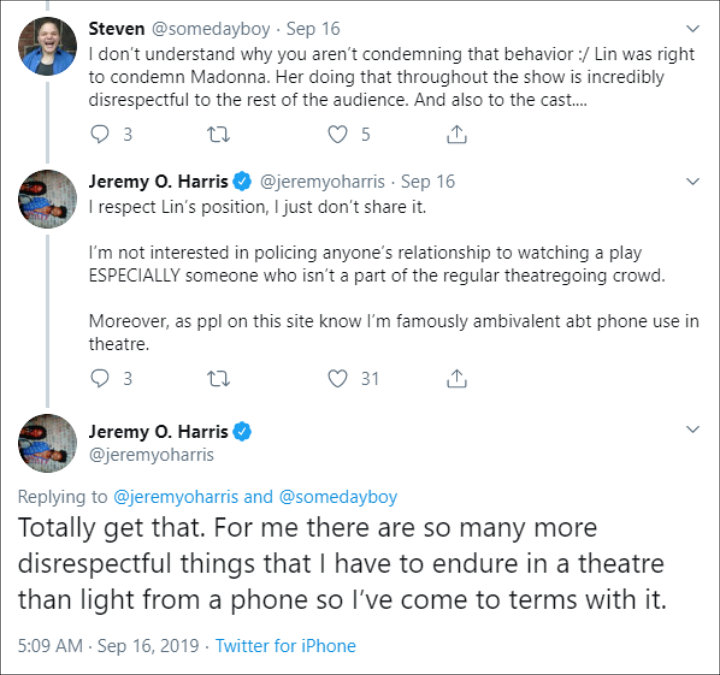 Jeremy O. Harris defended Rihanna for arriving late and texting throughout his play.

In response to his tweet, several people asked Jeremy why he would hold the start time for Rihanna but not others who were running late, and he answered that "Slave Play" was actually inspired by the star herself. 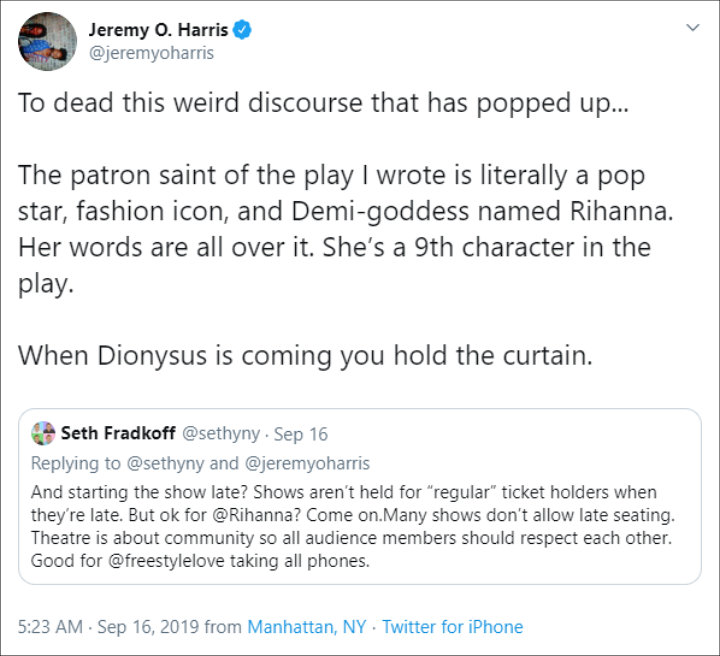 The writer explained why he held out the start time of the play until Rihanna arrived.

"To dead this weird discourse that has popped up... The patron saint of the play I wrote is literally a pop star, fashion icon, and Demi-goddess named Rihanna. Her words are all over it. She's a 9th character in the play. When Dionysus is coming you hold the curtain," he concluded.

Rihanna Accused of Deceiving Fans With Marketing of Her Lingerie Line