The 4-year-old daughter of Kate and Prince William pokes her tongue out when her mother brings her and brother Prince George to wave to the crowd at The King's Cup yachting regatta.

AceShowbiz - Princess Charlotte once again stole the show with her funny antics at The King's Cup yachting regatta in Cowes, Isle of Wight, on Thursday, August 8. The 4-year-old princess showed her cheeky side when her mother Kate Middleton brought her and her brother Prince George to a window above the stage where prizes were to be awarded to greet the audience.

Instead of waving to the crowd, the sassy princess stuck her tongue out. Kate quickly tried to stop her daughter from doing it, but she couldn't help laughing at Charlotte's gesture. The Duchess of Cambridge then pulled Charlotte away from the window, while George didn't seem to be fazed by the commotion and headed downstairs earlier. 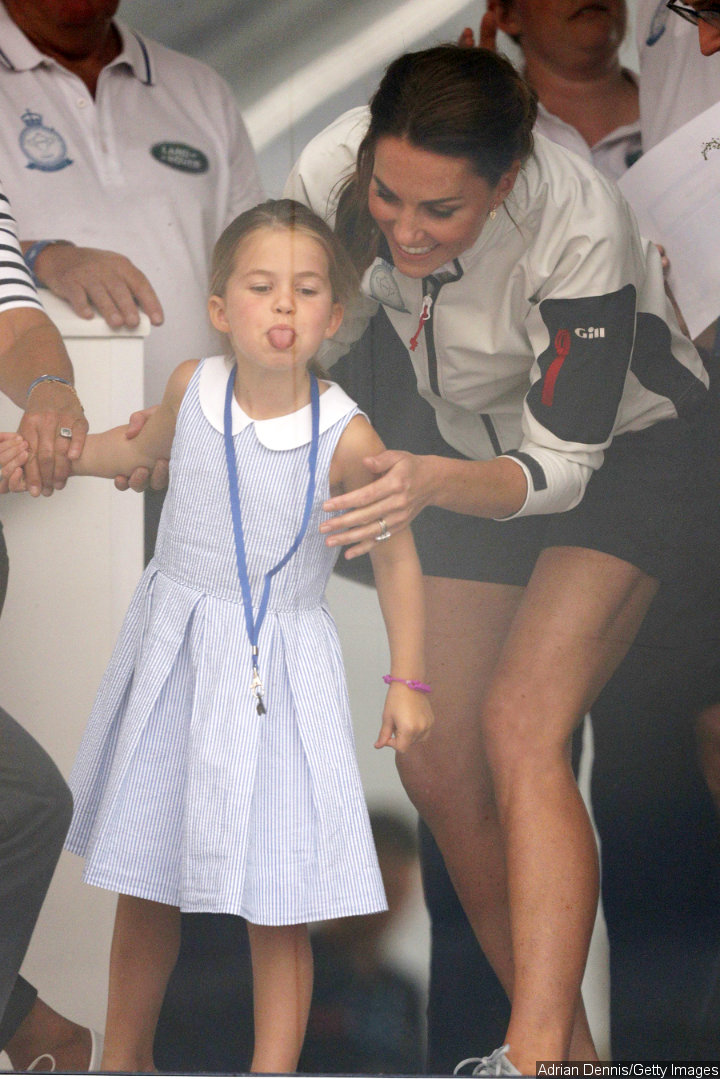 Kate Middleton laughs as Princess Charlotte pokes her tongue out at The King's Cup yachting regatta.

Charlotte looked sweet in a sleeveless Ralph Lauren dress with white-and-blue horizontal stripes for the occasion. As for her brother George, he donned a nautical striped shirt with a captain hat. The 6-year-old royal showed his missing front teeth while smiling.

The two eldest children of Kate and William watched from a boat as their parents faced off against each other in the charity sailing race. They wore life jackets while Kate's parents, Carole Middleton and Michael Middleton, looked after their grandchildren. Kate and William's third and youngest child, Prince Louis, was also reportedly in town, but was not spotted at the event.

Several celebrities, including Bear Grylls and John Bishop, also supported the inaugural King's Cup yachting regatta, which is aiming at raising support and funds for the causes that the Duke and Duchess support. Tusk Trust, with Bear at the helm, won the first race, with Prince William coming in third and Kate placing seventh.

Fans Defend Ariana Grande After Internet Cancels Her Because of This