Back on Good Terms? Carmelo and La La Anthony Spotted on Dinner Date Amid Split Rumors

But the married couple doesn't show PDAs when they are spotted going on a dinner date at Matsuhisa in Beverly Hills, with both of them opting for casual looks.

AceShowbiz - Are Carmelo and La La Anthony back on good terms following his cheating allegation? The lovebirds, who have been married for more than five years, were spotted over the weekend going on a dinner date at Matsuhisa in Beverly Hills.

In some photos that have been circulating online, both of them were sporting casual looks with the actress opting for a black sweatshirt and a white hat. Meanwhile, Carmelo Anthony rocked a white T-shirt, neon yellow-and-gray gym shorts and a colorful floral print baseball cap that he wore backwards. They didn't show any PDAs during the date, but the basketball star was seen holding the car door for La La at one point.

Split rumors between Carmelo and La La first emerged after he was spotted on a yacht with model Sara Smiri in France. The athlete initially denied the rumors, insisting that the woman who was seen with him is already married. However, Sara is in fact a single woman.

Earlier this month, a rep for the "Power" actress confirmed in a statement that the couple had been living apart for quite some time and that she was involved in "legal discussion" regarding future of their marriage. "As La La and Carmelo have been living apart for quite some time, La La is proceeding with legal discussions as the next step in the relationship," so the statement read. "They will remain loving and committed parents to their son."

La La and Carmelo wed in July 2010 before splitting seven years later amid allegations that Carmelo impregnated a then-24-year-old woman. However, in December 2018, they rekindled their relationship. Addressing their reconciliation in February, La La said, "I've been with my husband for 14 years now, so if you think you're going to go through 14 years without no bumps and bruises in the road, you're fooling yourself."

She continued, "It's about how you respond to it and sometimes things happen just to make the unit stronger and help you guys grow. And I think that's been the case for us... we're still working through some things but I'm happy to be in a much better place right now."

Back on Good Terms? Carmelo and La La Anthony Spotted on Dinner Date Amid Split Rumors

Spotted With Mystery Woman Aboard a Yacht, Is Carmelo Anthony Cheating on Wife La La? 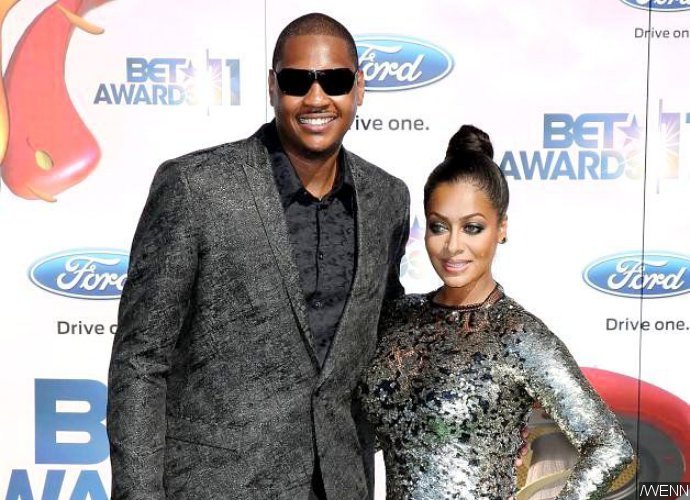