Speaking about the street altercation, AMA boss Luisa Melara claims she was filming a restaurant worker illegally dumping rubbish when the 'Notting Hill' star snatched her phone away.

AceShowbiz - Hugh Grant and his wife were involved in an angry altercation with an Italian official after he reportedly objected to her filming.

The "Notting Hill" star, 58, was holidaying with his wife Anna Eberstein, 40, when they were involved in the incident in a side street in Rome, Italy.

Video posted online shows him taking a phone from Luisa Melara, the head of the city council's Ama rubbish collection agency, as she was attempting to film a restaurant worker illegally dumping rubbish.

In the footage Hugh can be heard saying: "Don't put your foot out in front of my wife" before the filming suddenly cuts out.

Speaking to British newspaper The Sun, Luisa said she was trying to keep the actor and his wife out of shot, and that he then snatched her phone away from her.

"I didn't recognise him as Hugh Grant at first but then I did. He was very impolite and I told him so," the recycling chief explained. "There was no need for him to react as he did. I was trying to film the restaurant worker illegally putting rubbish out when they came into view."

"I put my foot out to warn her that I was filming and that I wanted her to stay out of shot. That's when they reacted and Hugh snatched my phone out of my hand."

After the incident Hugh, who is famously protective of his privacy, took to Twitter to deny he mistook Luisa for a paparazzi photographer and accused her of being rude.

"Sigh. Never remotely thought this person was a pap," he wrote. "Or trying to film me or wife. Paps don't have cell phones. And phone was not pointing at us. But she did stick her foot out very rudely in front of my wife who was passing in front of camera.I objected." 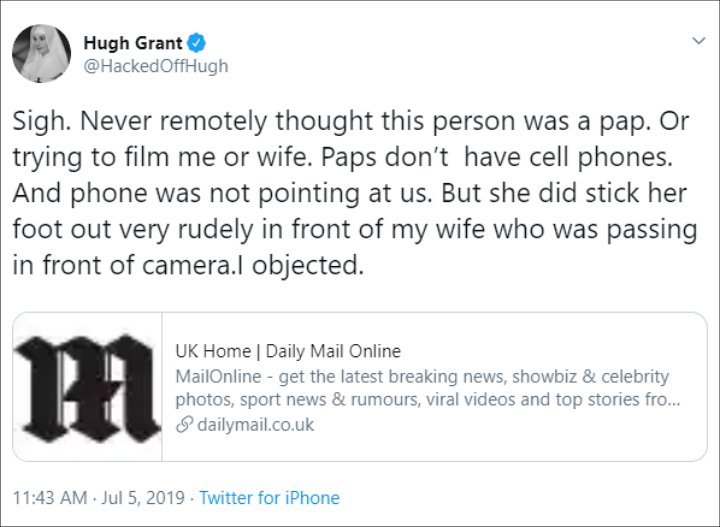 Anna, a TV producer and retail director from Sweden who is mother to three of Hugh's five children, married the star in May last year (2018).