The 'Guardians of the Galaxy' actor disses the action film series that star Vin Diesel as he dismisses a fan's suggestion that he should star in a new 'Fast and Furious' spin-off as the villain.

AceShowbiz - Dave Bautista just made it clear that he's not a fan of "The Fast and the Furious" film franchise. The retired wrestler-turned-actor, who is known for starring in many action films, was not impressed with an idea that he should star in a new spin-off as the villain, suggesting that they're bad films.

".....thank you for your consideration... #idratherdogoodfilms," so the 50-year-old former WWE Championship winner tweeted in response to a fan's suggestion. He added a sick emoji and vomiting emoji. 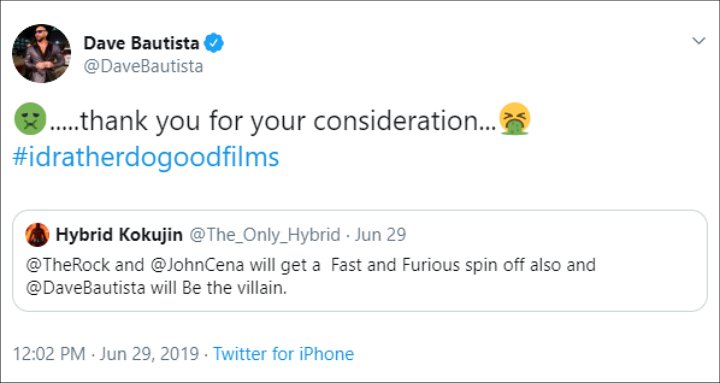 After he trashed the Gary Scott Thompson-created film franchise, another Twitter user reminded Bautista of his own film "Escape Plan 2: Hades", which was a major disaster according to most critics. "Presumably Big Dave has already forgotten Escape Plan 2....," the said user wrote to the actor.

Defending himself, Bautista seemed to admit that the "Escape Plan" sequel was a bad movie, but he still takes pride in the opportunity to star opposite action movie legend Sylvester Stallone. "Genius! Big Dave didnt state that he's never done a bad film," he replied to the tweet. "But I did them for particular reasons that helped build an 'acting' career. And I got to work with Sly so in your face with that! You're dismissed!" 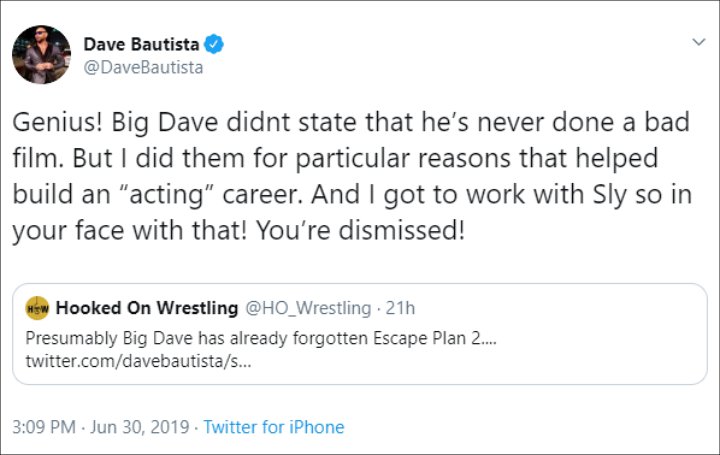 Bautista defends himself for starring in critically-panned 'Escape Plan 2'.

Bautista's diss on "The Fast and the Furious" film franchise comes as "Fast and Furious 9" has just started filming, with Vin Diesel back in the role of Dominic Toretto and Michelle Rodriguez reprising her role as Leticia Ortiz. Jordana Brewster is also confirmed to return as Mia Toretto. The franchise propelled lead actors Diesel and the late Paul Walker to international stardom following the release of its first film in 2001. It has also spawned a spin-off, "Fast & Furious Presents: Hobbs & Shaw", starring Dwayne "The Rock" Johnson and Jason Statham.

As for Bautista, he has been a part of Marvel Cinematic Universe through his role as Drax the Destroyer in "Guardians of the Galaxy" films and "Avengers: Endgame". He is set to reprise the role in upcoming "Guardians of the Galaxy Vol. 3". The hunky actor also returns for the direct-to-DVD sequel to "Escape Plan 2", "Escape Plan: The Extractors", and will next be seen in action comedy film "Stuber".

The Raconteurs' 'Help Us Stranger' Launches Atop Billboard 200 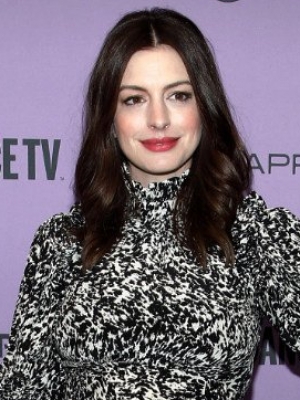 Billie Eilish, Moby Among Stars Featured in 'Coachella: 20 Years in the Desert' Trailer

'Ghostbusters: Afterlife' and 'Morbius' Pushed Back to 2021 Due to Coronavirus Crisis

Dwayne Johnson: We Are Developing 'Hobbs and Shaw' Sequel