Is NeNe Leakes Shading Husband Gregg for Cheating on Her With a 'Female Employee'?

Meanwhile, one fan is convinced that the 'Real Housewives of Atlanta' star is referring to co-star Porsha Williams, who recently split from Dennis McKinley after it was rumored that he cheated on Porsha.

AceShowbiz - It's just a few weeks ago when NeNe Leakes and husband Gregg celebrated the happy moment after announcing that Gregg is now cancer free. However, the recent tweet of "The Real Housewives of Atlanta" star seemingly hinted that there's a trouble in paradise.

The 51-year-old TV star took to her Twitter account to ask for opinion for a friend whose husband is being suspected of cheating on her with a female employee. "U find out ur husband/boyfriend been talkin on the phone regularly to 1 of ur female employees as 'just a friend' but u had no knowledge of it, did he cross any lines?" she wrote in the cryptic post.

However, NeNe insisted that it wasn't about her as she added, "Askin 4 a friend since y'all know EVERYTHING (but he said, we never talked sex! I just needed some1 to talk 2." 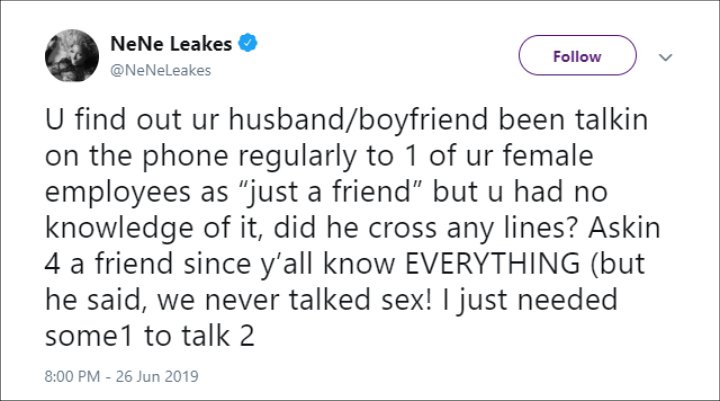 Some followers didn't really buy NeNe's words though as they thought the man in the tweet was none other than her own husband Gregg. "@greggleakes?!?" one fan asked, while another fan wrote, "Sounds like a story line to get you back to being relevant on RHOA and it sounds like another thing there putting it there to justify you leaving Greg… you've been doing that for quite awhile now."

Another one gave NeNe a lengthy response while assuming that it was about Gregg and the Bravo personality. "You need to have that deep conversation with Greg. Before you jump to conclusions. Communication is very important! But, actually listen to what he is saying don't read anything into your conversation. Pray before you talk to him. Ask GOD to intervene!" the comment read.

Meanwhile, one user was convinced that NeNe was referring to "RHOA" co-star Porsha Williams, who recently split from ex-fiance Dennis McKinley after it was rumored that he cheated on Porsha. "This is shade towards @Porsha4real guarantee and I will not even answer this messy crap. Really," the person.

NeNe has yet to confirm whether it's about her husband Gregg or it's her shading Porsha, with whom she's beefing.

Prince William Reveals His Biggest Concern If His Kids Were Gay

NeNe Leakes Gives Son Bryson a House for Birthday, His Baby Mamas Aren't Having It