Rather than 'meeting your beautiful daughter and holding her while shes an infant,' Layna claims on her private Instagram account that the rapper cares about his girlfriend Jade more.

AceShowbiz - Months after Tekashi69 a.k.a. 6ix9ine's baby mama Sara Molina claimed that the troubled rapper has a second child with another female, someone named Layna has come out to claim that she's his second baby mama and share the first look at her baby daughter. Not only that, but she also put Tekashi on blast for allegedly ignoring their love child.

Taking to her private Instagram account, Layna uploaded a picture of a little girl sitting on a stroller while holding a pink stuffed animal. The girl looked adorable in a red polkadot outfit and styled her hair in twin ponytails. While the photo looked heartwarming, the caption wasn't that soothing since Layna expressed her anger towards Tekashi.

She wrote, "[Tekashi] worried about grabbing a dirty fake butt that he probably gave bv (sic) during a jail visit instead of meeting your beautiful daughter and holding her while shes an infant you dummmyyy and your brother @odirtydollars speak tf up to your f***ing brother you seen and hearted the photos I sent you of her but you buying n****s rolexs for lil friends but cant do s**t for your niece while your bro locked up and let your mom meet her granddaughter like shes been wanting to since she was born!!!" 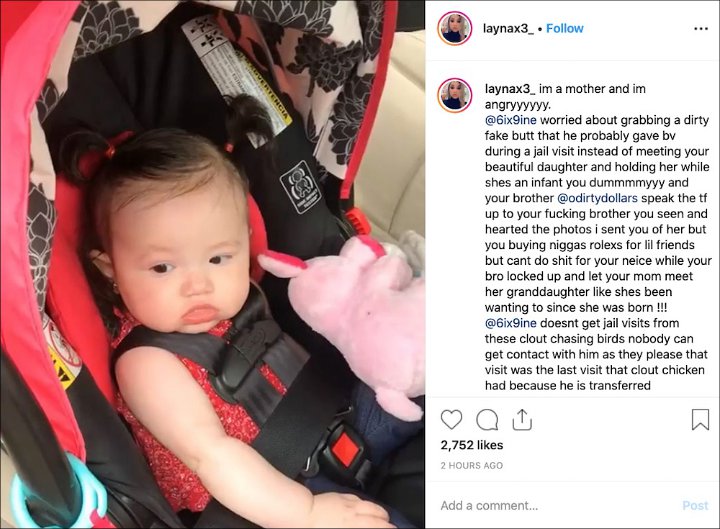 Layna appeared to be referring to the rainbow-haired spitter's girlfriend Jade, who visited him in jail back in December last year. He also bought her a Rolex and a Mercedes-Benz G-Wagon for her Christmas gift.

It may be a while before people can learn of Tekashi's response as he's currently in jail after getting indicted on firearms and racketeering charges. Earlier this year, he pled guilty to nine charges, including conspiracy, drug offenses and drug trafficking. Possibly facing a mandatory service of 47 years in prison, he is due to be sentenced on January 24, 2020.

Tekashi 6ix9ine's GF Trolls Him Over Christmas Gift, Calls Him a Rat

Report: 6ix9ine Under Investigation for Alleged Rape and Assault