Apologizing to the crowd for being so immobile after hurting his ankle from a run, the 'Shotgun' hitmaker jokes that he has gone 'off his head' due to the anti-inflammatory medications.

AceShowbiz - Singer George Ezra headlined his Isle of Weight festival set from a stool after hurting his ankle while out for a run.

The "Shotgun" hitmaker took to Twitter on Saturday, June 15 to warn fans about the injury, and reassure them the show would go on.

"Guess who went for a run yesterday and rolled their ankle? Guess who's headlining @IsleOfWightFest tonight? Guess who feels like a complete numpty (idiot)? That's right ladies and gentlemen! The answer is, Geoff!!," he joked. 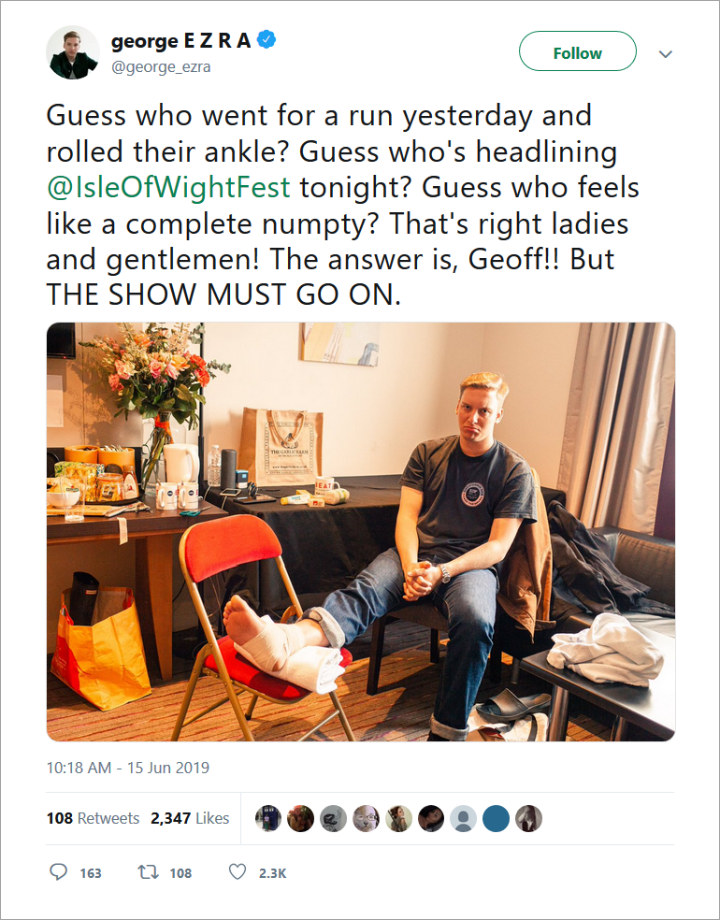 George Ezra shared made fun of his own injury on Twitter.

Speaking to Britain's "Absolute Radio" before taking to the main stage, Ezra said he was barely able to put weight on his ankle.

"It's about as rock and roll as you'd expect from George Ezra," he laughed. "I've got a stool in place, honestly I can't stand on it (his ankle)... I've called on the band - I've said, 'Extra energy tonight'."

During the gig, Ezra apologised to the crowd for being so immobile.

"I headed out (for a run) and the next thing I know I was lying on the floor and I'd rolled my ankle," he explained. "And so I can't move too well - I can't walk too well - so I must apologise that I'm going to be sat on this stool for this show."

"Ladies and gentlemen, you've got George Ezra off his head on anti-inflammatories and he's going to do the best that he can," Ezra quipped about his pain medication.

The singer also paid tribute to his idol Bob Dylan, covering the folk legend's "Don't Think Twice", "It's Alright", before closing his set with a mass singalong to "Shotgun" and a huge firework display.

The Isle of Wight festival continued on Sunday, June 16 with Madness, Jess Glynne and Biffy Clyro closing the event.

Demi Lovato to Open Up About Her Overdose in New Album