The 'Charmed' alum's so-called 'conservative Christian Worldview' initiative gets mixed reactions from Twitter users as many think abstinence is not the right solution for the issue.

AceShowbiz - Alyssa Milano, who was responsible for the spread of the #MeToo movement, is now launching a new movement in protest against strict abortion laws. Called a sex strike, it urges women to protect their "vaginas" by not having sex "until we get bodily autonomy back."

Asking people to join her pledge, she posted on social media on Friday, May 10, "Our reproductive rights are being erased. Until women have legal control over our own bodies we just cannot risk pregnancy. JOIN ME by not having sex until we get bodily autonomy back. I'm calling for a #SexStrike. Pass it on."

The former "Melrose Place" star tweeted again on Saturday, "We can LOVE sex and fight for our bodily autonomy. There are lots of alternatives to cis men. Protect your vaginas, ladies. Men in positions of power are trying to legislate them." 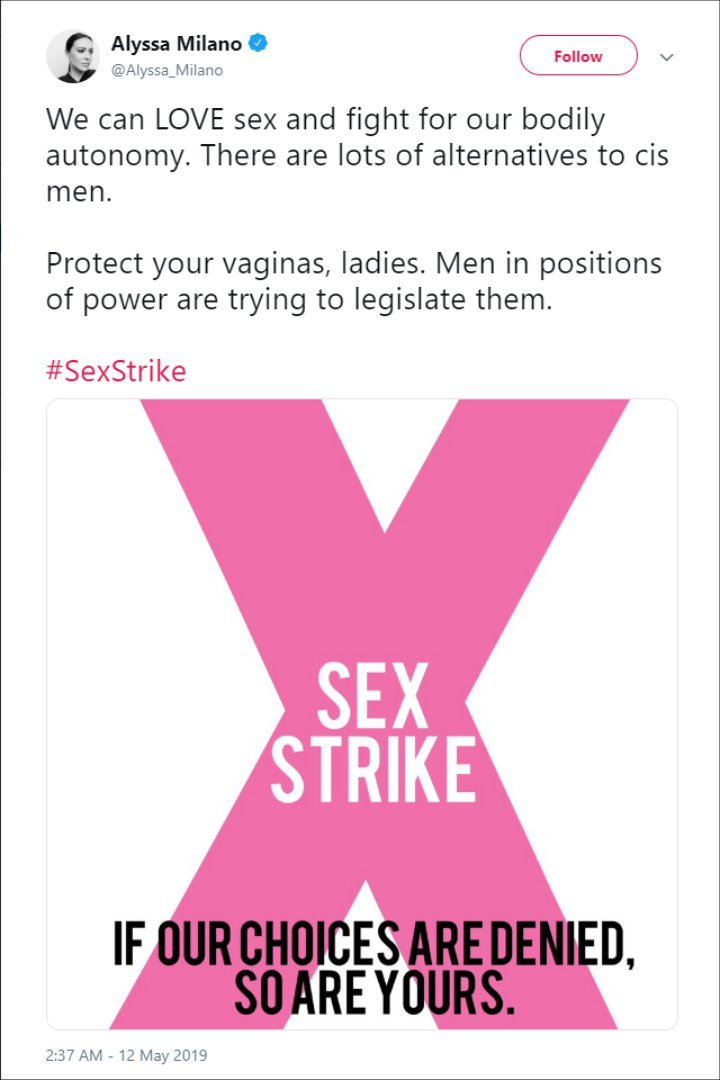 Speaking to the Associated Press, she argued that the call for a strike reminds "people that we have control over our own bodies and how we use them." She added, "We need to understand how dire the situation is across the country."

The 46-year-old activist cited several historical instances where women withheld sex as acts of protest, including Iroquois women in the 1600s to stop unregulated warfare, and sex strikes by Liberian women in 2003 that called for an end to a long-running civil war.

Asked how long the sex strike should last, Alyssa said people have to determine for themselves. As for her, she hasn't decided how long she would forgo sex. "I mean I don't know," she said. "I sent a tweet last night I haven't really thought much past that this morning."

Nevertheless, her call for sex strike received mixed responses from people. "This strike may mean well and contain cheap 'feel good' reactions," said one person. "But it pushes a sexist narrative that sex is something WE give to men as a form of currency. That is not empowering. At all."

Another reacted, "Living under the patriarchy has already robbed me of safety, autonomy, opportunities, and trust in our institutions. Now I'm supposed to give up sex, too, and play into the fiction that it is just a bargaining chip/transaction for women. Love you, but nope."

Someone else called out Alyssa for her idea, "A shame because again, you are using sex as a weapon, as a way to get what you want. I guess your brain wasn't good enough." Another argued, "I support the intent behind it but I do not support the action taken or the message it portrays. Withholding sex from men without making THEM accountable for THEIR actions achieves nothing."

"Yes!!! You know how many problems we would solve with abstinence before marriage? Unwanted pregnancy, STDs, among others. Thank you for embracing the conservative Christian Worldview :D," another sarcastically wrote.

Responding to those criticisms, Alyssa replied, "It's just too dangerous to have sex with men nowadays."

There are some others who supported Alyssa's initiative, though. Someone tweeted, "As a Bible-Believing Christian Conservative Pro-Life Voting Heterosexual Privileged American Male May I say, that I whole-heatedly agree with and support your #SexStrike initiative. May it endure throughout many generations to come."

"I'm praying your sex-strike catches on!! Think of all the abortions that will be avoided!" another said. Someone else echoed, "Pro-life here. Wholeheartedly in support of this."