The 'Goku' rapper sparks rumors that he has parted ways with the 'Nashville' actress after he was spotted kissing another woman at the Levi's in the Desert Pool Party in Indian Wells.

AceShowbiz - Rapper/actor Jaden Smith has sparked rumours of a split from his actress girlfriend Odessa Adlon after he was reportedly spotted kissing another woman during the Coachella festival weekend.

The "Icon" star, who wowed crowds at the California festival by performing atop a suspended Tesla car during his set on Friday, April 12, had been linked to the "Nashville" actress since the spring of 2017.

However, it appears they have since called it quits and Jaden has moved on, as he went public with his new romance at the Levi's in the Desert Pool Party at the Sands Hotel & Spa in Indian Wells on Saturday.

A source tells Us Weekly the couple openly held hands and kissed at the bash, while Jaden, 20, also took his new brunette love interest to the Bootsy Bellows Party and a PacSun event later in the day. 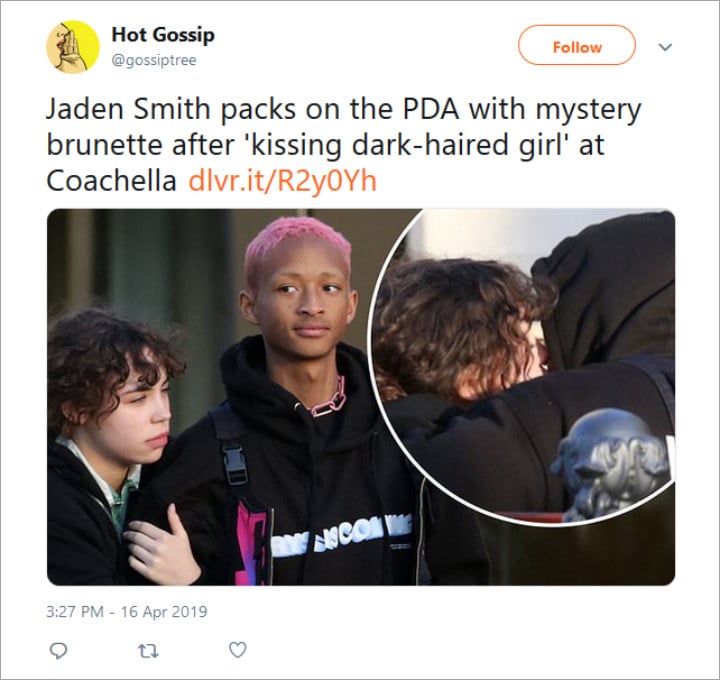 They have since also been caught on camera back in Los Angeles, stepping out for a dinner date in Calabasas on Monday.

Jaden, the son of Will Smith and Jada Pinkett Smith, has yet to comment on his new relationship, but he hasn't been seen out with Odessa for months.

He also previously raised eyebrows in November (2018) by claiming he and rapper Tyler, the Creator were more than just friends.

"I just want to say Tyler, the Creator is the best friend in the world and I love him so f**king much," Jaden told the crowd as he performed at the Odd Future star's "Camp Flog Gnaw Carnival".

Tyler, the Creator confirmed he was bisexual back in the summer of 2017.

Jaden Smith's Eating Habits Caused Will and Jada Pinkett to Stage Intervention: He Was Wasting Away

Jaden Smith Confuses Everyone for Shaving His Head During Live Concert