The 2-month-old girl looks calm while soaking wet in the bath as her mom Khloe is gushing about how time flies so fast on Twitter.

AceShowbiz - Khloe Kardashian's daughter True Thompson is turning 2 months old on Tuesday, June 12 and the first-time mom marks it with a new adorable photo of the infant. The reality TV star takes to Instagram Stories to share a picture of True from her bath time.

The photo gives a close-up look at the daughter of Khloe and Tristan Thompson as she taking a bath. She is soaking wet as someone can be seen holding her in the tub. The mother of one draws two hearts on it.

One of her followers pays a close attention to True's eyes. Khloe then replies to the fan by saying that True's eyes are "like a grey green but I read they can change up until 6 months old." 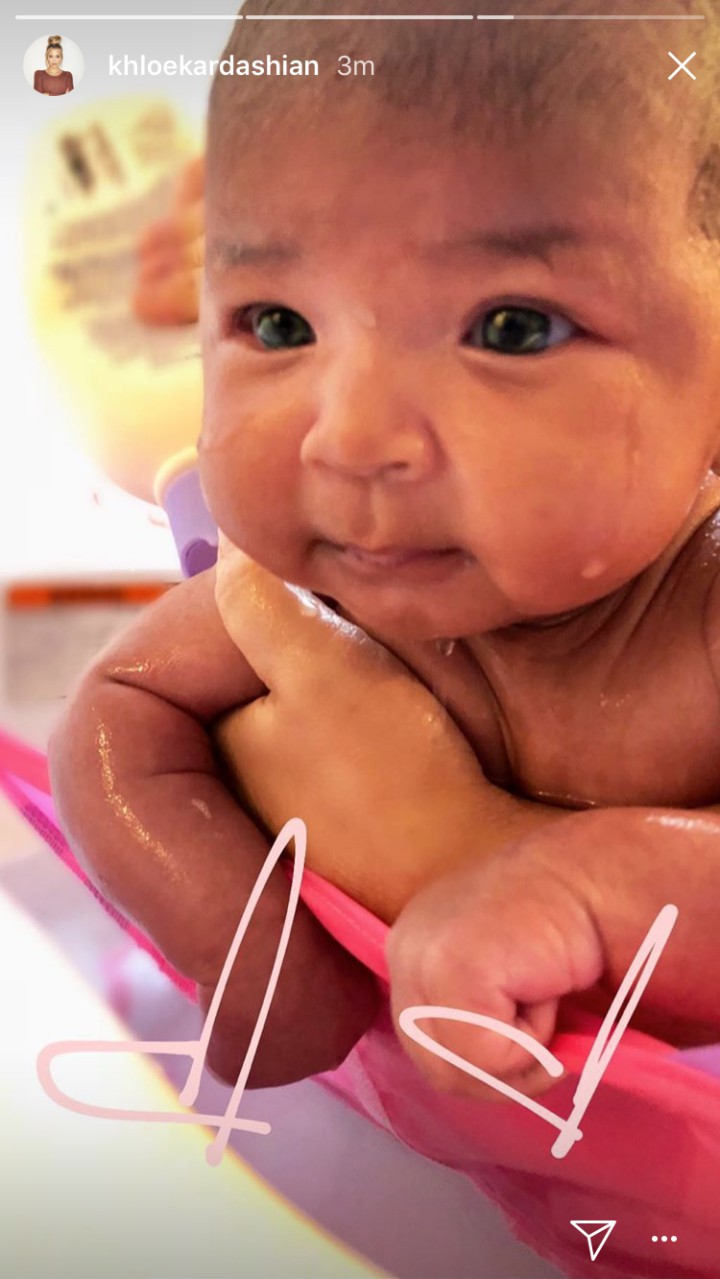 Khloe also posts a sweet message about her daughter on Twitter. She writes, "I cannot believe my girl is going to be two months old tomorrow. Where is the time going (sad emojis) but at the same time, every milestone I look forward to! I'm on alert every day to hear her first giggle ... cant wait for the giggles."

I cannot believe my girl is going to be two months old tomorrow. Where is the time going 😩😩😩 but at the same time, every milestone I look forward to! I’m on alert every day to hear her first giggle 🙌🏽🙏🏽 I cant wait for the giggles

Khloe gave birth to True on April 12, a few weeks after her beau Tristan was accused of cheating on her. The "Keeping Up with the Kardashians" star never directly addressed it, but she has been seen together with her baby daddy several time, hinting that she's giving the basketball player another chance.

"Khloe and Tristan were there together, they were sitting next to each other during dinner and there was no animosity between them," a source said to E! News about the couple's outing for their friend's birthday party. "Everybody looked happy, normal and like they were having a great time."

Unlike Khloe who is still posting photos of her daughter, her sister Kylie Jenner has decided not to share pictures of her daughter Stormi. She recently deleted all photos which showed Stormi's face from her Instagram account.

While the 20-year-old star didn't explain the reason behind her move, The Sun reported that the new mom did so after she received vile abuse, including terrifying threats to her daughter. "There have been an increasing number of trolls on social media calling Stormi ugly, and throwing out really horrible insults," a source told the site. "It's been really upsetting for Kylie, because also some of the comments are direct threats to kidnap her."

The source added, "Kylie is terrified - she's stepping up security. She hardly takes Stormi out in public but is now making sure that she's got protection at all times."