The rappers spark collaboration rumors after Drake's personal photographer and videographer posted on Instagram Stories a video which appeared to be taken in Wyoming.

AceShowbiz - Is Kanye West collaborating with Drake on his new album? The "Gold Digger" spitter, who is currently in Wyoming to work on the album, sparks the rumors after Drake's personal photographer and videographer, Theo Skudra, posted on Instagram Stories a video which appeared to be taken in the region.

In the clip, he showed off a view of snow-capped mountains, blue skies and a beautiful balcony with log wood railing. It looked very similar to the ones that Kim Kardashian had posted on Snapchat when she visited her husband. In addition, Drake mentioned he needed to pack for a flight during his Twitch stream of Fortnite.

@TeamKanyeDaily Drake’s photographer, Theo just posted this on his insta story. Drake also mentioned in Ninja’s stream last night that he needs to leave soon to pack for a flight😬 pic.twitter.com/lZilkI2ukR

Should the rumors be true, Drake is not the only rapper who accompanies Kanye in Wyoming. The Yeezy founder is accompanied by Travis Scott (II), several producers, friends and his personal trainer. Kim joined him after attending Khloe Kardashian's baby shower, though she was only there for a short time.

"It's a quick visit for Kim, but she loves being at the resort to spend time with Kanye and get away from it all," an insider previously revealed. "It's a good change of pace for her and some down time to relax."

Prior to this, Kim reportedly asked her rapper husband to include their daughter North on a few tracks off his upcoming album after watching Jay-Z include Blue Ivy on his "4:44".

"When Kanye is in album mode, he's a different beast and there isn't anything that gets in his way," a hip-hop insider revealed. "Kim knew what she was getting herself into when she decided to marry Kanye, and she won't impede him in any way."

"Kim and Kanye both draw inspiration from their children, and Kim has even suggested to Kanye that he include North on a couple tracks as well just like Jay did with Blue Ivy," the so-called insider continued. "It's the competition between the Carters that keeps Kim so involved and backing Kanye's artistic vision."

Kanye West Storms Out of Live Interview During Anti-Semitic Debate 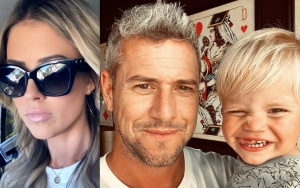