The 29-year-old supermodel wants to see how far she can push her topless picture on Instagram as she is back with another topless photo with her nipple covered with a strategically placed spray can.

AceShowbiz - Just like Instagram which incessantly removes any pictures showing women's nipple, %cChrissy Teigen% is relentless to post her topless picture on the photo-sharing site. The beautiful model posted her new topless photo on Instagram on Tuesday, June 30.

The picture showed topless Teigen sitting on a make-up chair with a male hair stylist in a black shirt standing next to her. Though she was topless, she smartly covered one of her nipples in the picture with a strategically placed spray can. She covered her other breast with a patterned fabric. Apparently she wanted to pass Instagram's censorship following the removal of her previous topless picture showing nipple from the website. The Sports Illustrated cover model also tried to shift people's attention to her hairdo with a caption for the picture which read, "HAIR." 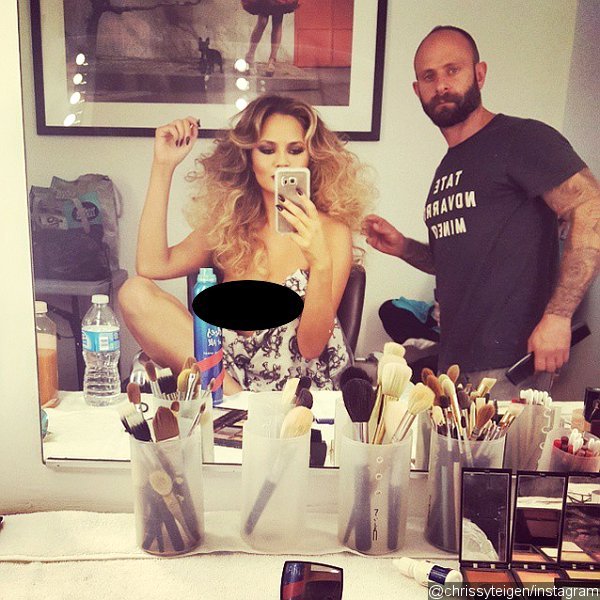 On Monday, June 29, %cJohn Legend%'s wife was upset after she knew that her photo for W magazine which she posted on Instagram was removed by the website. The picture showed her topless with her breasts on full display. She only wore white panties, bracelet and lace boots in the picture. Following the removal, the 29-year-old supermodel then made a warning tweet which was apparently directed to Instagram. It read, "the nipple has been temporarily silenced but she will be back, oh yes, she will be back."

Teigen later uploaded three edited pictures from her photoshoot for the magazine. She applied classy oil painting, pencil sketch and color pencil sketch photo effects to make her nipple less obvious. However, her effort apparently wasn't appreciated by Instagram as the website took down again those pictures.