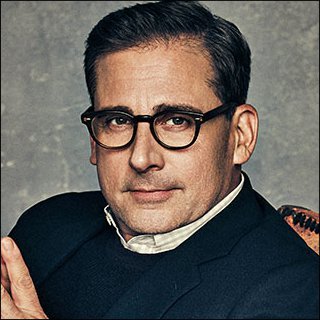 Effectively using his unique, often surreal deadpan humor to frequently make memorable comedic performances, Steve Carell undeniably has established such a fine career to strive as one of major comedic actors in Hollywood film industry at last. Born Steven John Carell on August 16, 1962 in Concord, Massachusetts, Steve's natural talent in comedy has been apparent since he still studied at Denison University in Granville, Ohio as he often made people laugh through the touring company he formed that went around the country to carry out entertaining sketches. Following his graduation in 1984, he then headed for Chicago to join its famed improvisational comedy troupe, The Second City, while also performed with several noted theater groups at The Goodman Theater and Wisdom Bridge Theatre, gaining more experience which really helped him when he decided to venture into screen production in 1991.

Landed his film debut in %cJames Belushi%'s vehicle of "Curly Sue" (1991), Steve then managed to gain a handful of appearances either on TV or movies, like "The %cDana Carvey% Show" (1996), "Over the Top" (1997), and "Suits" (1999) before became one of the correspondents in Comedy Central's "The Daily Show" by the turn of the 21st century. A popular program, it unmistakably gave him ample chance to grow his comedic skills and notably, provided him enough buzz to be able to make a big return to silver screen through %cTom Shadyac%'s "Bruce Almighty" (2003). The hilarious flick was a huge success, garnering more than 484 million U.S. dollar around the world and so gloriously propelled the funnyman to widespread recognition also more propitious offers for sure.

Next seen in other box-office hits of "Anchorman" (2004) and "The 40 Year-Old Virgin" (2005) which was also well-reviewed by critics, Steve kept hitting the screen hard, even when he shifted to TV production to be included in the regular cast of NBC's comedy series of "The Office", first aired in 2005. For his role as conniving office manager Michael Scott there, HFPA eagerly granted him a Golden Globe Award for Best Performance by an Actor in a Television Series - Musical or Comedy in 2006, a great honor which surely raised his status several notch higher among other comedic artists. With attainment after attainment he had scored, it was not surprising to see the actor become extremely busy afterwards as there were numerous film projects lining up for the rest of 2000s, including those of "Little Miss Sunshine" (2006), "Evan Almighty" (2007), and Get Smart" (2008), and "High T" (2009).

Concerning his private life, Steve is happily married to actress/writer %cNancy Walls% since 1995. First met in The Second City, the couple later joyously welcomed their lovely daughter, Elizabeth Anne, on May 25, 2001 and son John Carrell by June 2004.