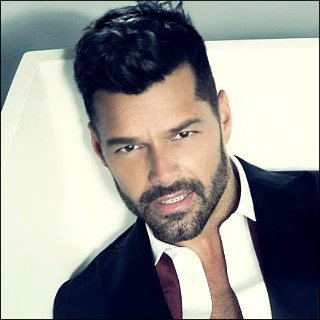 One of the performers at An Intimate Evening With KTU by New York radio station WKTU-FM held on November 8, 2005, Ricky Martin surely has made a glorious comeback with another English-language album, "Life," as it instantly sold more than 73,000 copies a week after being released. Scheduled to have an interview on CBS' "The Early Show" on November 11, this Latin superstar aimed to launch a dual disc edition of "Life," which contained an exclusive behind-the-scenes feature of the album's making, precisely 11 days after his appearance on the high-rated program. Concerning his return to the concert stage, he undoubtedly would generate hysteria all over the globe through his worldwide tour beginning on November 15 at Auditorio Nacional in Mexico City.

Named Enrique Jose Martin Morales by his parents, Enrique Martin Negroni and Nereida Morales, Ricky was born on December 24, 1971, in Hato Rey, a small peninsula located in the area of Puerto Rico's capital city, San Juan. His interest in performing arts had been apparent to everyone since he was still a student of Colegio Sagrado Corazon grade school for the little boy was actively involved in its plays and choir. Taking singing lessons and some auditions for TV commercials, he successfully joined a Latin boy band, %cMenudo%, at the age of 12 with the encouragement of his separated parents who had their divorce when he was merely 2 years old. This talented teenager then spent his next five years together with Menudo to work on several albums and hold national tours before finally quitted the group in 1989.

Following his departure, Ricky went to New York with the purpose to develop a solo career, but he soon found out that it was such a hard task since there was barely any propitious chance approached him. Unemployed for a year, he changed direction to Mexico which turned out to be a right decision for he later earned a role in the musical play of "Mama ama el Rock" and even secured a record deal with Sony Music Entertainment. As his debut album touched the market in 1991, people also began to notice him in the regular cast of the Mexican soap opera, "Alcanzar una Estrella II." The self-titled work surprisingly sold for 500,000 copies worldwide to become one of the highest debuts for a Latin artist under Sony, automatically leading Ricky to a considerable national popularity.

Creating another success with his sophomore effort "Me Amaras" (1993), the stunning singer headed back to North America, this time landed his feet on the glamorized scene of Los Angeles. Turned his attention to acting for a while, he managed to appear on an episode of NBC comedy series, "Getting By" (1993-1994), aired in October 1993. Ricky then satisfyingly took one step further when ABC gave him the role of Miguel Morez in its long-running series, "General Hospital" (1963). During this period, he returned to music, entering the recording studio to work on his third album which later was entitled "A Medio Vivir" (1995). A compilation of pop, rock and Latin tunes, it immediately became a hit around the world with 600,000 copies sold within six months and ultimately was certified Gold by October 1997.

The tremendous success of "A Medio Vivir" catapulted Ricky to wider attention, particularly through one of its tracks, "Maria," which turned out to be his first song to infiltrate The Billboard Hot 100 Chart. This great result subsequently prompted him to conduct a worldwide tour around Latin America, Europe, Asia, and U.S., performing live in front of thousands enthusiastic fans. His star shone more brilliantly by 1997 as "Vuelve," his fourth work, directed him to acquire the title of Best Latin Pop Performance at the 41st Annual Grammy Awards held in 1999 while the album itself garnered an excellent sale of 8 million copies internationally. The magic touch still continued, even grew greater, when his first English-language effort, "Ricky Martin," came up in the same year he received the honor.

Through this eponymous album, Ricky truly embraced massive popularity as a celebrated world star, especially after its single, "The Cup of Life" or "La Copa de la Vida," became the anthem of the 1998 World Cup. The other tracks, like "She's All I Ever Had", "Shake Your Bon-Bon", and "Private Emotion" also were the year's smash hits, but it was "Livin' La Vida Loca" that actually struck hard in the ears of every music listener. One of the biggest selling number one singles, it secured the top spot of nine Billboard Music Charts, including Billboard Hot 100, therefore established Ricky as the first Latin male solo artist of the SoundScan era to hit the first place on the chart. By the end of the year 1999, he had already collected some prestigious awards, especially those came from MTV Video Music Awards in the categories of Best Dance Video and Best Pop Video.

Sold over 17 million copies, not only "Ricky Martin" topped The Billboard 200, but also was certified seven times Platinum by RIAA, placing its singer to gain the same recognition as other Latin artists, like %cJennifer Lopez%, %cMarc Anthony%, and %cEnrique Iglesias%, had experienced. His next piece of work, "Sound Loaded" (2000), managed to score a significant result though it was unable to surpass the fantastic attainment of its predecessor. Gaining the 4th rank on The Billboard 200, two out of its sixteen compositions, namely "She Bangs" and "Nobody Wants to be Lonely" made their way to enter the top 20 of Billboard Hot 100. After the return to his Latin root with the launching of two Spanish-language albums, "La Historia" (2001) and "Almas del Silencio" (2003), Ricky underwent two-years hiatus before coming up with "Life" on October 11, 2005. Debuted at number 7 on The Billboard 200, the album was considered to be his most eclectic cross-cultural collection to-date.

Aside from his professional singing career, Ricky is also well known for his concern to humanity, especially that dealing with children. Through the "Ricky Martin Foundation," he deeply participated in the battle against child prostitution, pornography, and trafficking. Another project was to donate a million dollar worth of musical instrument to Puerto Rican public schools and to fight for children's rights on a global and local basis under People for Children program. However, this does not mean that he ignored other world's issues as he really participated in building and restoring houses for the Tsunami victims in Phang Nga province, Thailand besides being an active supporter of the Pediatric AIDS Foundation, the Carousel of Hope, and the Rainforest Foundation. As for his love life, Ricky had an on/off relationship with %cRebecca de Alba%, a TV journalist he met in Mexico, since 1989 before eventually broke up in 1999.

Not hinting any work on studio album, Ricky came up with 'Ricky Martin MTV Unplugged' that was released in November 2006. This was the same live album that earned him four nods at 2007 Latin Grammy Awards, including Album of the Year, Record of the Year, Best Long Form Music Video and Best Male Pop Vocal Album.