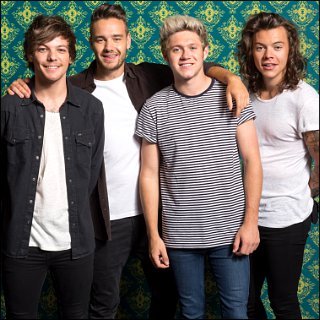 In 2010, five boys beat hundred of thousands others to get the coveted spots in the seventh series "The X Factor". %cNiall Horan%, %cZayn Malik%, %cLiam Payne%, %cHarry Styles% and %cLouis Tomlinson% did not know each other before the audition of the British talent show but they were grouped together by fate and later achieved fame in one direction.

The members applied as solo candidates but they did not qualify as "Boys" category, thus judge %cNicole Scherzinger% suggested them to form a group so that they would qualify as "Groups". One Direction began toppling their competition one by one although they remained the only group in its category. With %cSimon Cowell% as their mentor, One Direction managed to finish third behind runner-up %cRebecca Ferguson% and winner %cMatt Cardle%.

But One Direction were the quickest to break through the charts in United Kingdom and United States. Their supposed winning song "Forever Young" was leaked online after the "X Factor" final. The group signed a recording deal with Syco Records and they went on the annual contestants tour through April 2011. Meanwhile, work on their debut album was also moving fast.

Their influence started to spread Stateside and they took the invasion one step at a time. The group signed up as the opening act of %cBig Time Rush% from February to March 2012. They made a quick stop at the 2012 BRIT Awards where they received the honor of Best British Single for "What Makes You Beautiful".

In the U.S., the boys were handled by Columbia Records. "What Makes You Beautiful" was released as the first U.S. single and it debuted at number 28 on Billboard Hot 100. Due to the rising hype around the band, the label moved the release date of "Up All Night" a week earlier on March 13, 2012. It performed well on the Billboard Hot 200 chart by going straight to number one for selling 176,000 copies in the first week of sale.

The so-called second British Invasion started spreading as the band were invited to perform on "Saturday Night Live" and 2012 Kids' Choice Awards. The band made a cameo on Nickelodeon's "iCarly" and were booked to have their own TV series on the network. To contain the anticipation, the band announced a headlining tour in North America from May to July 2012.

In late 2012, One Direction released their sophomore album, "Take Me Home". Featuring songs and production of Sweden's Carl Falk, Rami Yacoub and Savan Kotecha as well as contributions from fellow British act %cEd Sheeran%, the record topped charts around the world. Its singles like "Live While We're Young", "Little Things" and "Kiss You" also ruled the charts across the globe. The boys then embarked on another tour that saw them playing over 100 shows, including six sold-out nights at London's massive O2 Arena. At the same time, they were being filmed by director Morgan Spurlock for "This Is Us", a mix of documentary and concert footage that proved to be successful at the box office when it was released in August of 2013.

While touring, One Direction began working on their third album, "Midnight Memories". Released just in time for the 2013 holidays, the record featured songwriting input from all the members, a new production team and some new folk and '80s hair metal influences. Peaking at number one in seven countries, it spawned the hit singles "Best Song Ever" and "Story of My Life". To support the album, the group launched "Where We Are" tour in 2014. They also started writing new material for their fourth album while hitting the road. Later in 2014, the band announced their new LP would be called "FOUR". They also planned another world tour to support the effort slated for November 17.

In the middle of the tour, Zayn shocked millions of fans when he announced that he quit the band to become a normal 22-year-old boy. He made the decision after being absent from some shows and rumors emerged saying that he cheated on then-fiancee %cPerrie Edwards%.

A few months after Zayn's departure, the band surprise-released "Drag Me Down" as the first single off their fifth album, which was later revealed would be called "Made in the A.M." and come out on November 13. However, fans were left heartbroken again when the boys announced they would take a lengthy break in 2016 after five years on the road. There wouldn't be a tour to support the project.