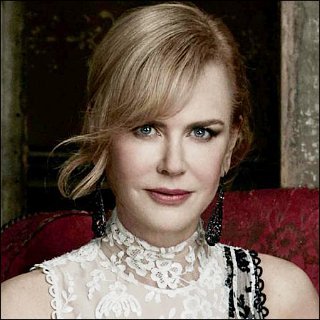 Hollywood top Australian actress and singer Nicole Mary Kidman was born on June 20, 1967 in Honolulu, Hawaii. Her father, Dr Antony David Kidman, was a biochemist and clinical psychologist; and her mother Janelle Annee Glenny was a nursing instructor. Nicole has one sister, %cAntonia Kidman%, who is known as an Australian television personality. The whole family immediately moved to Washington D.C. when Antony had to do his research on breast cancer and returned to Australia when Nicole was four years old.

Back to her parents homeland, little Nicole who had ever majoring ballet when he was three years old, decided to study at St. Martin's Youth Theatre in Melbourne, the Australian Theatre for Young People in Sydney before she took voice production and theatre history at Philip Street Theatre. After that, she entered North Sydney Girls' High School but had dropped out right after her mother was diagnosed with breast cancer and hence she had to help/replace her mother to take care the family and do the house hold.

Her love to acting grew as she became an adolescent that she preferred to practice her skill rather than hang out with her pals. Her hard work resulted in her very first appearance in %cPat Wilson% music video for the song "Bop Girl" in 1983. And at the end of the year, she started to play the supporting role in particular movies, including "BMX Bandits," "Bush Christmas" and "Vietnam" (1987), from which she won her first Australian Film Institute Award. Finally, with the help of an American agent, Nicole got her US debut in the at-sea thriller "Dead Calm" (1989) where she played with %cSam Neill%.

In 1990, Nicole started to step her foot on America movie production and got the role as a doctor in a stock-car racing movie, "Days of Thunder," where she met her future and later on ex-husband %cTom Cruise%. Married to actress %cMimi Rogers% didn't hinder Tom's love for the young, beautiful and attractive Nicole. At the end, after his divorce with Mimi, both Cruise and Kidman went to a vow in altar on Christmas Eve of 1990 in Telluride, Colorado. Sometimes after their marriage, the couple adopted two children, Conor Antony and Isabella Jane, before they, due to career conflict, dissolved their marriage on August 8, 2001.

Though had been married and adopted children, still Nicole kept improving her career more and more. It's not surprising then that in years she played in several other movies, including the Australian film "Flirting" (1991) where she played as a catty high school senior, and in the gangster film "Billy Bathgate" (1991) where she played as %cDustin Hoffman%'s moll. In 1992, Nicole reunited with Tom Cruise played in "Far and Away," a movie about young Irish lovers who flee to America in the late 1800s. In 1995, she proved her break out role in "Batman Forever" where she played Dr Chase Meridian role that soon brought her career right to the top before she, in the following years, acted in several other movies, like "To Die For" (1995), granted her a Golden Globe; "The Portrait of a Lady" (1996); "The Peacemaker" (1997); and in the sexual thriller "Eyes Wide Shut" (1999).

In 2001, Nicole career shined even brighter than ever as she played in the famous musical film "Moulin Rouge!" which tells the story of a young British poet, Christian played by %cEwan McGregor%, who falls in love with the star of the Moulin Rouge cabaret, Satine played by the Australian beauty herself. The success of this film challenged the actress to play in a horror movie so-called "The Others," followed then by the 2003 movie "Cold Mountain" where she portrayed a city woman named Ada who has just moved to the rural farm where her minister father died, and struggled to keep the farm going with the help of Ruby played by %cRenee Zellweger%.

Not only she's good at acting, but also deserves two thumbs up for her singing ability. She once sang the "Come What May" song in duet with Ewan McGregor in 2001 and in the same year she also sang "Somethin' Stupid" single with %cRobbie Williams%. The fame and popularity in movie and music business, indeed, do not prevent Nicole to be a good wife and wise mother. This smart actress, who admits to like %cAnne Carson% poetry and %cPhillip Larkin% writing, still able to make time for doing her hobby, writing short stories in her free time and hopes to publish them one day. Besides, this loving beauty who thinks that "Children should be allowed to grow up without fear of cruelty," also has enough time protesting child abuse as well.

Thus, the many awards she got would not surprise us because she deserves them anyway. The numerous honors she's obtained among others include; chosen by USA People Magazine as one of the 50 Most Beautiful People in the World [1999], won a Golden Globe Award for Best Actress in a Musical or Comedy for "Moulin Rouge!" (2001), named one of People Magazine's '25 Most Intriguing People of 2001', named E!'s Celebrity of the Year 2001, named Entertainment Weekly's Entertainer of The Year for 2001, and named one of the 50 Most Beautiful People by People Magazine in 2002. Most of all, Nicole has also received a star on the Hollywood Walk of Fame on January 13, 2003; ranked #31 in Premiere's 2003 annual Power 100 List; ranked #83 in 2002; voted the 5th Sexiest Female Movie Star in the Australian Empire Magazine September 2002; and become the first Australian actress to win the Best Actress Academy Award.

In time after her divorce with Cruise was legalized, Nicole has to face her friends and Cruise himself disapproval concerning her romance with the bad-repute film producer, %cSteve Bing%. Shortly then she was spotted to have a romantic dinner with movie boss, %cScott Stuber%, based on which media speculated on her break-up with Bing. Came afterwards was an award she got at the 8th annual Skinnies Awards for her deep concern to keep treating her healthy and bright looks despite the many cosmetics applied to her face on the set of her many films. Still about her love life, the actress once again reported to romance %cKeith Urban%, an Aussie country singer with whom she was reported to soon get married by spring 2006. Rumored to have their wedding in a low-key ceremony on the beaches of the US Virgin Islands, the couple was said to expecting their first child together. After so many rumors speculating on her romance with Urban, Nicole finally broke her silence, outing statement rubbished the wedding and pregnancy rumors.

In somewhat a shocking revelation, the actress, however, finally came clean in May 2006 in New York, during which she was about to host the 30th anniversary gala for UNIFEM, the United Nations Development Fund for Women, that she and Urban did engage. She said "He's actually my fiance. I wouldn't be bringing my boyfriend". The confirmation, however, instead of ending months of speculation on them and their relationship prompted such others as their wedding and Nicole's pregnancy. Was highly reported to have pregnant with Urban's baby, many believed this as the strong reason provoked the pair to tie the knot, which obviously was slammed by the actress who through her publicist released a statement saying, "She's not pregnant" while adding "This is a rumor that comes around every month. It has for the past year or two. Believe me on this one: She is religious, and that would never do."

Amidst the hectic speculation on the street, the pair finally broke their silence, hinted at their impending nuptials in a joint statement read "We are very happy to be back in Australia. We have come home to celebrate our wedding with our family and friends". Since then on, both Nicole and Urban have become the most wanted celebrities in Australia, kept creating frenzy in both local and international media concerning their much anticipated and highly awaited marriage. And after all the rumors and speculation, the actress and the singer finally said their vows on June 25th, 2006 just after sundown at the Cardinal Cerretti Memorial Chapel outside of Sydney with fellow celebrities, like %cRussell Crowe%, %cNaomi Watts%, and %cRupert Murdoch% among the guest list. Lit by candles, the ceremony looked lavish but intimate with the bride wore a flowing white dress by Nicolas Ghesquiere for Balenciaga and pearl drop earrings.

The ceremony was not for public consumption, thus it was understandable that security was tight for the wedding. Though, Nicole and Keith acted fair enough with the shutterbugs for the newlyweds had asserted to release a wedding picture of themselves to prevent camera clash on their big day and to put a hold on a big paparazzi payout. On top of that, the celebrity couples planned to sell their wedding photos with proceeds to be donated to a children's hospital in Australia. It was not clear on how much money would the husband-and-wife collected for the auction, but one thing for sure fans will impatiently wait for the gorgeous couple's first public wedding picture to be released.

Love life aside, Nicole effortlessly continues to score major billing in her next move in Hollywood film industry, even had three of her movies namely "The Invasion", "Margot at the Wedding", and "The Golden Compass" all come up in the same year of 2007. While 2008 would spot her in both "Australia" and "The Reader", the year after finds her keep being busy as she gets cast in "Need" alongside best friend Naomi Watts and "Rabbit Hole" which she also produces. The latter appears to not only be the one she serves as the producer in for there are few others like "Alone" (2009), "How to Marry a Millionaire" (2009), and "Monte Carlo" (2010) with the latter two having possibilities to get her as leading actress as well.