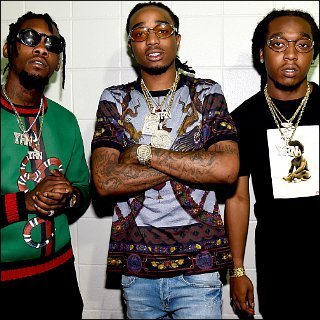 Produced by Zaytoven, the track went viral and peaked at number 99 on the Billboard Hot 100. It also inspired rapper %cDrake% to join the trio for the official remix. They later performed it at the 2013 iHeartRadio Music Festival. On June 13 that year, Migos released their mixtape "Y.R.N (Young Rich Niggas)" to critical acclaim.

On February 25, 2014, Migos released their new mixtape "No Label 2", which was downloaded over 100,000 times in the first week of its release and was certified gold on popular mixtape site DatPiff. "No Label 2" was met with generally positive reviews from music critics.

In June 2014, it was revealed that Migos had been signed to 300 Entertainment, which is distributed by Atlantic Records. Thy later released "Fight Night" which went on to become another hit for the group. It peaked at No. 69 on the Hot 100, making it the three rapper's most successful single to date.

Several days after the arrest, Takeoff, Quavo, and six members of the their entourage were released on bond by the Bulloch County District Attorney's Office while Offset and six others remained in custody without bond.

Despite Offset remaining in custody, the group assured fans that their debut album "Yung Rich Nation" would still arrive on June 16. The LP was eventually pushed back to July 31.

It features some guest appearances from %cChris Brown% and %cYoung Thug%. Even though it was slightly delayed, the album received generally positive reviews from music critics. In its first week, the album sold 15,000 copies and peaked at No. 3 on the Top Rap Albums chart.

In September 2015, the group left 300 Entertainment for good. They moved to Quality Control Music because they felt that the new management could manage them alone and would increase revenue stream. In the same month, the three rappers released new mixtape titled "Back to the Bando". The first song off the mixtape, "Look at My Dab", was released on September 6. The song gained worldwide attention thanks in large part to the dance called "dabbing".

In February 2016, the trio kicked off their "Dab Tour" at San Fransisco's The Regency. They were joined by fellow dab enthusiasts Jose Guapo, Rich the Kid and Skippa Da Flippa while on the road. The month-long trek came to an end in Charlotte, NC on March 15.

In July 2016, Migos dropped their new EP titled "3 Way". Laced with five tracks, the EP serves as the follow-up to "Y.R.N. 2". It features %cBlac Youngsta% as the lone guest, while the production was handled by Zaytoven, Cassius Jay, Dun Deal and Rick Rack$.

In September 2016, the hip-hop group revealed their plans to release their long-awaited sophomore album called "Culture". Its lead single, "Bad and Boujee" featuring %cLil Uzi Vert%, was released on October 28. The song went viral after a large number of memes using the song lyrics surfaced. This phenomenon eventually caused the song to reach No. 2 on the Billboard Hot 100.

"Bad and Boujee" gained more recognition, leading to it topping the Hot 100 chart, becoming Migos' first number one single in the United States. Additionally, it took over the top spot on Billboard's Hot R&B/Hip-Hop Songs and Hot Rap Songs charts.

Ahead of the release of the sophomore album, Migos released the second single off the effort, "T-Shirt". The three-piece group also unveiled the music video for the track in which they were seen getting cozy in snowy climate with some snow bunnies.

"Culture" itself was finally released on January 27, 2017. The sophomore album received generally positive reviews from music critics and debuted atop Billboard 200 chart. It also topped the U.S. Top R&B/Hip-Hop Albums chart, marking the group's first No. 1 album on both charts.

2017 was indeed a good year for Migos. The success of their sophomore album had made them receive some awards at BET Awards. They brought home Best Group and Best Collaboration at the award show, which took place at the Microsoft Theater in Los Angeles on June 25.

Later on, Offset confirmed in an interview with Hollywood Fixer that "Culture II", the continuation to their second effort, would be released in October. However, it was then revealed that the upcoming effort would make its way out to stores in January 2018.

Even though the release of the album got delayed, it didn't stop Migos from releasing new music. On May 30, they premiered a new song entitled "Too Hotty", which was featured on Quality Control's compilation album. Following that, the lead track off "Culture II", "MotorSport", was premiered. %cNicki Minaj% and %cCardi B% lent their voices on this track.

Migos closed the year by releasing the second single off the album, "Stir Fry". Produced by %cPharrell Williams%, it will serve as the official song of the 2018 NBA All-Star Weekend. The visuals for the track itself was released shortly after the trio released "Culture II" on January 26. And just like the previous album, "Culture II" debuted atop Billboard 200 chart.