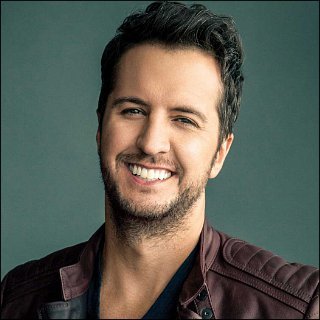 %cLuke Bryan% was born and raised in Leesburg, G.A., spending most of his childhood in a farm. He helped his father with his peanut and fertilizer businesses while doing outdoor activities like hunting and fishing. His family was very supportive of his music talent that at the age of 14 he got his first guitar. His mother urged him to belt out George Strait songs over and over while she drove him into town to shop.

By the age of 15, Luke was able to entertain a small crowd. His father took him to a local club and let him sing. His talent was spotted by two local songwriters who had provided tunes for Nashville artists. They asked him to join them at writing sessions at a local church. Graduating from high school, Like sought the opportunity to move to Nashville to pursue career in music.

However, the day he was to move to the bigger city, his brother got killed in an auto accident. "That shut down all plans to move," Luke said. "The only thing on my mind was being with my family." The experience made him a better and soulful songwriter. He still played in local clubs with his bands and recorded an album while enrolling at Georgia Southern University. But he buried his hope to become a musician when he chose to help his father in his business.

His father knew that Luke's passion lied on music so he encouraged him to move to Nashville or he would "fire" him. Luke was finally in Nashville in September 2011. Within two months, he scored a songwriting deal with a company owned by the famed songwriter Roger Murrah. One of his works appeared on %cTravis Tritt%'s 2005 album. An A&R representative at Capitol Records then saw him perform at a club, and signed him to a recording contract on the spot. "It was wonderful. All of my dreams and wishes came together right then and there in that room," he said.

Luke's debut single "All My Friends Say" was released in early 2007 and his name was catapulted higher when a song he wrote for %cBilly Currington% reached number one on Billboard U.S. Hot Country Songs chart that same year. His debut song peaked at number five and the album "I'll Stay Me" was quickly released in August 2007. Third single, "Country Man", was released in February 2008 and became his second Top 10 hit.

Luke tapped into the college market with a series of EPs released to coincide with spring break. Je came up with another album "Doin' My Thing" in October 2009 and he was named Academy of Country Music's top new artist and top new solo vocalist that year. In addition, fourth single "Do I" received breakthrough video of the year award at 2010 CMT Music Awards.

Luke then spent the whole year preparing his third studio album "Tailgates & Tanlines". First single "Country Girl (Shake It for Me)" was released in March 2011 and peaked at number 22 on Billboard Hot 100. The album was then released on August 9, 2011.

Luke found bigger success in 2013 with his "Spring Break... Here to Party" EP which peaked at No. 1 on both Billboard 200 and Billboard's Country Albums chart. In April that year, he released "Crash My Party" which served as the first official single of his fourth studio album of the same title. Premiered in a performance at the 2013 ACM Awards, the song reached No. 1 on the Country Airplay chart in July 2013.

In November 2014, it was confirmed that Luke had begun writing and recording songs for his fifth studio album "Spring Break... Checkin' Out". The last "Spring Break" album was released on March 10, 2015 and debuted at No. 3 on Billboard 200.