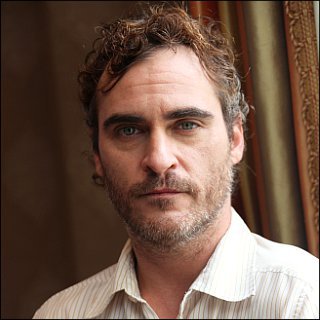 In early 1980s, two small boys were singing and dancing on the streets of North Hollywood for the sake of a little money on the hand. Wearing Kmart shirts, they would happily sing %cThe Beatles%' songs with no slightest shame. People passed by and none of them knew then what they would become someday: the next big thing in Hollywood. Those kids were none other than the Phoenix brothers, River and Joaquin. Together they struggled through the hardship of life and career until they could taste fame and money a decade later. Unfortunately, in the late 1993 River died of overdose, leaving his younger brother to preserve their family name in Hollywood's showbiz. Joaquin made it true.

Born on October 28, 1974, Joaquin came from a unique family. Her Russian/Hungarian mother, Arlyn Dunetz left her first husband and headed for West Coast where she met John Lee Bottom who was an Irish/Spanish decent. They discovered that they shared mutual interest so they got married and traveled across the US. In 1970, they had their first child %cRiver Jude Bottom% in Madras, Oregon before having the second son, Joaquin Raphael Bottom in San Juan, Puerto Rico. The other three children, Rain, Liberty and Summer were also each born in different cities. After Summer's birth in 1978, they changed their surname to Phoenix. Joaquin too, decided to change his first name to Leaf because he was irritated on how people kept mispronouncing his name. "I changed my name because no one in the States could pronounce 'Joaquin' and I used to get really embarrassed about it as a kid. All kids in my family had gorgeous names & I got 'Joaquin'. I said 'This is not good'. Even I can't say it." Thus, for the next eleven years he was credited as Leaf.

With five children under the care, John who was working as a carpenter couldn't provide much for his family. They were poor but hadn't lost the optimism. Seeing aptitude within their children, John and Arlyn encouraged them to join a local talent contest. Somehow, River and Joaquin's name traveled to actress and producer, %cPenny Marshall% who then suggested that they came over to her studio if they happened to visit LA. With no further thought, the whole family moved to LA. Their luck there wasn't fast growing, but slowly their condition turned upside down. Arlyn got a job as a secretary in NBC and she was introduced to a child-casting director. That was how River and Leaf started to appear in TV series "Seven Brides for Seven Brothers" in 1982. Possessing a natural talent, River was promptly set as the lead role of "Backwards: The Riddle of Dyslexia" (1984) where Leaf played his brother. They did splendid performance that Young Artist Awards nominated both of them Best Young Actor in a Family Film Made for Television in 1985.

Not as good-looking as his brother, it took a harder path for Leaf to unravel fame. By the time he starred in "SpaceCamp" (1986), River had starred in Oscar nominated flick "Stand by Me" (1986). Not wanting to be left behind, Leaf scored his biggest movie yet in "Parenthood" (1989) opposite %cSteve Martin%, but again his brother's career was many steps ahead by being teenage Indy in "Indiana Jones and the Last Crusade" (1989). This huge gap didn't make Leaf jealous of his brother "It gets on my nerves to always be compared with him. My brother was a magnificent person and an outstanding actor." Still high-spirited he continued filming his next movie "Walking the Dog" (1991), but it wasn't that successful. He decided to change back his name to Joaquin and take a break from acting. He was ready to act again two years later but the incident on his brother's death had left him devastated. He didn't make any comeback until another two years when he became %cNicole Kidman%'s object of seduction in "To Die For". Fell one time but stand up two times, Joaquin could see the end of the tunnel.

Off-screen, Joaquin's love life was equally interesting. While living in New York, he dated a girl named Acacia but the relationship didn't last long as he met %cLiv Tyler% in 1995. He fell in love immediately like how he described it, "I was in awe. Every once in a while you find an actor that, with one word, can sum up eight different emotions. She absolutely nailed that." They became an item and even had a chance to appear in the same movie titled "Inventing the Abbotts" (1997). They broke up a year after the movie and Joaquin was seen occasionally with some models afterwards.

Ready to make a breakthrough, he was put in parallel with top actors. %cOliver Stone%'s "U Turn" (1997) gave him the chance to appear opposite %cSean Penn%, %cJennifer Lopez% and %cBilly Bob Thornton%. Meanwhile, he was teamed with %cVince Vaughn% in "Return to Paradise" (1998) and also %cNicolas Cage% in "8MM" (1999). So far his roles had been either protagonist or eccentrics, but he wasn't to be trapped in the circle. He showed a totally different ego in "Gladiator" (2000) as the corrupt prince of Roman, Commodus. His portrayal of a villain was so potent and vivid that the 2001 Oscar nominated him for Best Actor in a Supporting Role. With such nomination in hand, he was confident to move on to the next big hit "Quills" (2001). The movie cast him as a priest with his inner conflict to resist desires that the vicious writer %cMarquis de Sade% liberally radiated. It was simply a good resume for him.

Already included as an A-list actor, Joaquin would next be tied with director %cJames Gray% to complete a potential movie "We Own the Night" (2007) where he would be a nightclub manager who had to save his father and brother from Russian gangs' chase. Whether he would score another triumph in this movie, it was still in question. But one thing for sure, as a talented actor, his out coming movies would be highly demanded. Back in early 1990s people might associate 'Phoenix' as River Phoenix. But in 20th Century, it was always Joaquin Phoenix.