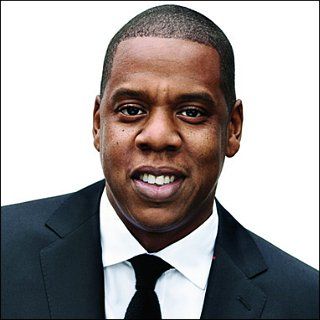 Born Shawn Corey Carter on April 12, 1969, %cJay-Z% grew up in drug-infested area, Marcy Projects, Brooklyn. He was raised only by his mother, Gloria Carter, after his dad abandoned him and his brothers. Growing up, he experienced the tough life on the streets of New York. He explored his rap skill when he briefly attended Eli Whitney High School with fellow rappers %cNotorious B.I.G% and %cBusta Rhymes%. Alongside his partners in his early group "Original Flavor", Jay-Z, %cDamon Dash% and Kareem "Biggs" Burke co-founded an independent label called Roc-a-Fella Records in 1996. Later, Roc-a-Fella was folding into Def Jam Recordings.

Jay-Z could be considered as a person who could do almost everything. Beginning his career as a rapper and a businessman, he was holding an important position in Def Jam as the president and CEO. "I was forced to be an artist and a CEO from the beginning, so I was forced to be like a businessman because when I was trying to get a record deal, it was so hard to get a record deal on my own that it was either give up or create my own company," Jay-Z said.

As an artist, Jay-Z sold more than 18 million albums worldwide. Starting from his debut album "Reasonable Doubt" (1996), Jay-Z had collected many prestigious awards, including American Music Awards, Billboard Music Awards, BET Awards and Grammy Awards for his dedication in hip-hop

Aware of the hard days that he had been through to achieve success, Jay-Z published his autobiography entitled "The Black Book" along with the release of "The Black Album" in 2003. At that time, Jay-Z was romantically linked to former %cDestiny's Child% singer %cBeyonce Knowles%. The couple, who once were invited by Prince Charles to dine at Buckingham Palace, worked together on Beyonce's album "Crazy in Love". During an interview with %cEllen DeGeneres%, Beyonce claimed that all the wedding reports were "big fat rumors," while revealing further that "one day I hope to be married with children."

In 1998, Jay-Z achieved a big success with "Vol. 2: Hard Knock Life". The title track was considered as the rapper's most successful commercial single until now. Jay-Z released "Vol. 3: Life and Times of S. Carter", which also received critical acclaim, in the following year. He released several albums from 2000 until 2003, before announcing that he would take a break from music industry.

After going on hiatus for three years, Jay-Z made his comeback by releasing "Kingdom Come" in November 2006. On the effort, the rapper worked together with some massive artists, such as %cTimbaland%, %cKanye West%, %cDr. Dre% and %cColdplay%'s frontman %cChris Martin%. The album, like its predecessor, received a warm welcome from fans and sold over two million copies worldwide.

There were speculations about Jay-Z leaving his position as the CEO of Def Jam to join his lover Beyonce in Columbia. However, during an interview in 2007, the rapper denied having made decision to leave Def Jam and claimed that his contract with the label merely expired and not yet renewed. He came out with the announcement of a new album titled "American Gangster" in September 2007 after being inspired by a movie with the same title, "American Gangster". Its first single "Blue Magic" was released on radio outlets on September 20, 2007, followed by the second one "Roc Boys (And the Winner Is…)" that was produced by %cP. Diddy%. Upon the album release on November 6, it entered the Billboard 200 chart at No. 1 after selling 425,000 copies. This achievement put him in the same position to the late legendary singer %cElvis Presley%, after all of his ten albums opened at the top position.

Since then, Jay-Z had been busy headlining a number of festivals, including the O2 Wireless Festival, the Hove Festival and the Roskilde Festival. Apart from his musical career and business ventures, Jay-Z was actively involved during presidential campaign in 2008, and was an avid supporter of Barack Obama. In April 2008, he married Beyonce after fueling dating rumors for years. In 2009, Jay-Z left Def Jam and signed a multi-million dollar deal with Live Nation, with whom he started a montage and music publishing company Roc Nation. In addition to Jay-Z himself, the label managed %cRihanna%, %cKanye West%, %cShakira%, %cTimbaland% among many others.

Jay-Z's eleventh studio album "The Blueprint 3" was released on September 8, 2009. Not wasting any time, he kicked off a North American tour in support of the effort in October. He also collaborated with Rihanna, %cBono% and %cThe Edge% on a song titled "Stranded" for "Hope for Haiti Now" fund-raising that year. Additionally, he later released a memoir titled "Decoded".

Jay-Z welcomed his first child with Beyonce, a baby girl named Blue Ivy, in 2012. He then started working on a new album, and finally released the follow-up to "The Blueprint 3" in 2013. Titled "Magna Carta… Holy Grail", the album debuted atop Billboard 200 after selling 528,000 copies in its first week. In 2015, Jay-Z made headlines when he and some massive artists, such as %cMadonna%, %cNicki Minaj% and %cJack White%, launched a streaming service called Tidal.

The rapper decided to go on hiatus from hitting the studio yet again. However, he made a grand comeback in June 2017 by releasing an album titled "4:44" following the birth of his twin children, Sir and Rumi. The set, which was Tidal and Sprint exclusive, went platinum less than a week and received critical acclaims from the likes of %cKendrick Lamar% and %cSnoop Dogg%. The effort could be Jay-Z's most emotional and raw album as the rapper admitted that he had cheated on his wife, announced her mother as a lesbian, and slammed his fellow rappers on it.

For the physical release, Jay-Z provided three bonus tracks, including a song which featured Blue Ivy rapping for 45 seconds straight. The rapper was said to be ready to take the new album on the road by the end of the year, following his $200 million touring deal he signed with Live Nation in May.