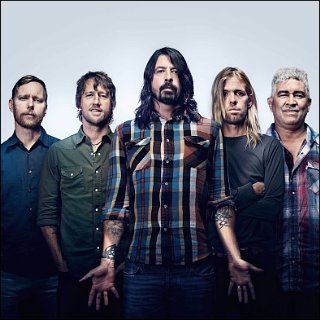 When a band, let alone rock band, has been performing together for a decade or more, it would be considerable if they went in hiatus, or even worse, broke apart. However, that was not the case for Foo Fighters. Though the band experienced considerably many stumbling stones along their way to stardom, this American alternative rock band has grown more solid than ever. Along their 10 years of togetherness, the band that is characterized by loud, heavy guitars with pretty melodies combined with pop songwriting have successfully created one hit song after another and nailed numerous notable awards, including awards from the respectable Grammy Awards.

Originally a one-man-band, Foo Fighters is the brainchild of %cDave Grohl%, the drummer of another great rock band, %cNirvana%, whose loyalty to his former band made him suppressed his writing talent. Later, Grohl often noted in interviews that he was well aware of the infamous drummer joke: "What did the drummer say just before he got fired? Hey, guys, let's try one of my songs!", which explained that he feared that his song writing could break the band's great chemistry. Hence, perhaps, if not for the death of Nirvana lead singer, %cKurt Cobain%, that led to the dismantling of the band, Foo Fighters might never be heard of or known by many rock enthusiasts. A few months after the shocking death of Cobain, Grohl finally dared to openly book a professional studio, recorded his compiled materials by himself, and sent it to many record companies. His recording demo which caused fierce bidding battle between record companies eventually ended up in the hands of Capitol Records executives and became Foo Fighters' self-titled debut album. After the completion of "Foo Fighters" (1995), Grohl formed the band, whose name was inspired by the term used in the World War II to describe mysterious aerial phenomena. First, he recruited Sunny Day Real Estate's bassist, Nate Mendel, who brought the Sunny Day Real Estate's drummer, William Goldsmith to join the group. Finally, to complete the pack, he enlisted Nirvana's guitarist, %cPat Smear%. The foursome then embarked on their first tour as a group in the spring of 1995. Meanwhile, the band's first single "This is a Call", which was released in June 1995, got to #2 on Modern Rock Tracks, reached rock fanatics' ears and quickly lured fans for the then young band. As their next singles "I'll Stick Around" and "Big Me" sat on the top ten Modern Rock Tracks, the album, which eventually certified platinum, was catapulted to #23 on Billboard 200 chart and landed the band a nomination for 1996 Grammy Award-Best Alternative Music Performance, three 1996 MTV Video Music Award nominations for Breakthrough Video, Best Alternative Video and Video of the Year, as well 1996 MTV Video Music Award-Best Group Video.

Following the success of their first album, the group then began recording their second album. Unfortunately, in the midst of the recording, a fracture inside the band broke out since Grohl and Goldsmith clashed. As a consequence of the conflict, the band re-recorded the whole album and Goldsmith left the band forcing them to find another drummer. Right before "The Colour and the Shape" was released on May 20, 1997, Grohl searched for Goldsmith's replacement, much to his surprised, Taylor Hawkins, who was a touring drummer for a famous post-grudge singer, %cAlanis Morissette%, stood up for the position. Few months after the releasing of the album, Pat Smear announced that he also quit from the band and thus, Franz Stahl was brought in. Despite the turbulence inside the band, Foo Fighters' second album went to be sold over 2 million copies, becoming the band's biggest U.S. seller to date, nailing the number 10 spot on Billboard 200, and spawning the band's singles "Monkey Wrench", "Everlong", and "My Hero". Through this record, they received two 1997 MTV Video Music Award nominations, a 1998 MTV Video Music Award nomination, and two 1998 Grammy Award nominations, including Best Rock Album. In spite of the continuous success that the band received, they had to once more lose a member due to creative differences. Prior to the recording of the band's third album, Stahl left Foo Fighters, making the band to record their third album with only three men as what happened in the recording of the previous album. Still, the departure of Stahl didn't leave the band crippled. To prove, "There is Nothing to Lose" that was released in 1999 by their new record company RCA, spawned the band's most recognizable single, "Learn to Fly", which peaked #1 on Modern Rock Tracks and #2 on Mainstream Rock Tracks, and earned the band two more Grammy Awards, that is 2001 Grammy Award for Best Short Form Music Video and for Best Rock Album. Adding to their achievements, the band finally found their solid form with the joining of Chris Shiflett, the band's touring guitarist.

With their newest member, the band then ventured to record their next album "One by One" (2002). The recruitment of Shiflett proved to be worthy since their fourth album scored even higher than their other albums, plunging to #3 on Billboard 200. Again, they received praises and awards, including 2003 Grammy Award-Best Hard Rock Performance for the single "All My Life" and 2004 Grammy Award for Best Rock Album. Following the rave reviews, the band did their biggest world tour, including two sold-out nights at Wembley Arena, London and became a headliner at the Reading Festival. In 2004, "One by One" received platinum certification becoming Foo Fighters' fourth platinum album. Their following project would be "In Your Honor", released in summer 2005. This album is a double album, the first showcases Foo Fighters' typical rock songs and the second displayed acoustic tracks. It became the band's most successful album yet as it reached #2 in U.S. as well as in U.K., selling more than 300,000 copies in its first week of release in U.S. alone and as of October 2006, it was sold over one million copies. The album's singles "Best of You" broke through #18 Billboard 100 and plunged to the top position on the Modern and Mainstream Rock Tracks. Their next two singles, "DOA" and "No Way Back" were never far from top ten position on Modern and Mainstream Rock Tracks. Proving that they grew stronger as a group, the band nailed nominations after another with this album, naming some were 2005 Billboard Music Award, 2005 MTV Europe Music Award, and 2006 Grammy Awards.

On September 25, 2007, Foo Fighters released their sixth album "Echoes, Silence, Patience & Grace", which already reached #3 in U.S. and # 1 in U.K. in its first week of release. The album first single, "The Pretender" got to the peak position on Modern and Mainstream Rock Tracks again, and already received a 2007 MTV Europe Music Award nomination for the category of Video Star. Though admitting that the band were still shadowed by the past disintegration, as Grohl explained, "Every album that we made, I'd always imagine it to be our last", the past time showed that this lineup will be the final form of the band and the future seems bright for the considerably matured band.