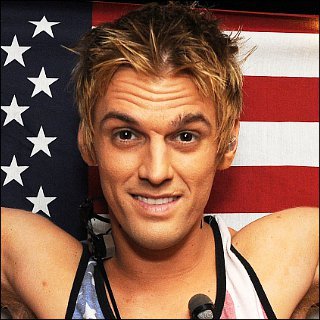 The young and handsome American pop singer Aaron Charles Carter was born on December 7, 1987 at Tampa General Children's Hospital in Tampa, Florida. He used to live there with his father, Bob Carter and his lovely mom, Jane Carter. Also live with him are his oldest brother Bobbie Jean (B.J.), his singer older sister Leslie, his %cBackstreet Boys% boy-band brother, %cNick Carter% and his older twin sister, %cAngel Carter%, who works a model. Then, after his parents' divorce, Aaron lived with his father in Marathon, Florida. This might because he could no longer believe in his mother who had stolen a lot of money while he was on tour.

Aaron's musical career was actually begun when he became the lead singer of the Dead End Band at his 7 years age. Likes to spend his spare time doing scuba diving in the waters behind his home in the Florida Keys, he surely got his scuba diving certificate at age 8. Besides, lovely Aaron also likes spending his time playing with his 9 dogs, 4 cats, 2 turtles and 2 birds. Two years later, around the year of 1996, Aaron left the Dead End band when at the end he found out that his music interest in pop was far different from his other friends who interested in alternative music instead.

In the year 1997 Aaron began his solo career breakthrough, performing with his brother, Nick at one of Backstreet Boys' concerts held in Germany. Soon after his contract deal with Edel Records who found him through the concert, Aaron released his first single "Crush on You." Then in 1998 the young singer released his first full album entitled "Aaron Carter" which was very success in Germany. One year later Aaron subsequently released "Aaron's Party (Come Get It)" and promoted it in the opening of %cBritney Spears%' "Ooops!" summer tour. Kept improving his vocal quality, in the year of 2001 he produced his third album, "Oh Aaron", which was debuted at number seven on the Billboard charts and certified platinum.

Then on September 3rd, 2002 Aaron released his 4th studio album entitled "Another Earthquake!" before then in 2003 was made busy by the making of his biography "Aaron Carter: the Little Prince of Pop" which soon followed by the producing of his “Most Requested Hits” album. All of his hard works worth Aaron such awards, as ranked at number 52 on the Rolling Stone's Hot 100 Artists and named a celebrity Grand Marshal for the Krewe of Edymion Mardi Gras parade in New Orleans in 2003. Moreover, he also got the Favorite Rising Star award at the Nickelodeon Kid's Choice Awards (2001) and thus he is very popular not only in USA and Japan, but also in Germany, where there are a lot of older fans.

As for his love life, Aaron once created media frenzy when he started dating %cHilary Duff% and %cLindsay Lohan% all at once at the same time, prompted feud between the two Hollywood starlets when they realized that he has cheated them. After the widely tipped buzz, the starlet went single again, but it wasn't long for on September 17th, 2006 the guy popped the question to girlfriend, Playboy Playmate %cKari Ann Peniche%, in Las Vegas while they were onstage in front of 200 people during the Playboy Comedy Tour at the Palms Casino Resort. Sad to say but the engagement only lasted for one week as the pop star came to such realization that he had not “ready for marriage quite yet”. Nonetheless, it didn't take long for Aaron to fall in love again as nearly one week after the “short-lived engagement incident”, he dated another teen girl who happened to be singer %cKaci Brown%.