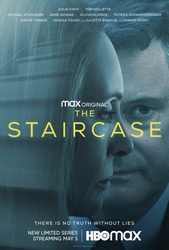 Based on the docuseries of the same name, "The Staircase" tells the story of Michael Peterson (played by Colin Firth), a crime novelist accused of killing his wife Kathleen after she is found dead at the bottom of a staircase in their home, and the 16-year judicial battle that followed. De Lestrade was granted unusual access to the case immediately following Kathleen’s death in 2001 in Durham, NC. Her husband, Michael, a local public figure and successful novelist, quickly became the prime suspect and was convicted.