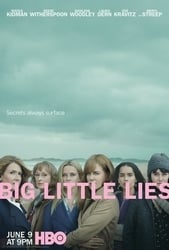 Based on Liane Moriarty's bestselling book of the same name, this subversive, darkly comedic drama tells the tale of three mothers of first-graders whose seemingly perfect lives unravel to the point of murder.

In the affluent beachfront community of Monterey, Cal., a suspicious death at a coastal elementary school fundraiser draws attention to the frictions among some of the mothers. Madeline (Reese Witherspoon) and Celeste (Nicole Kidman), longtime friends and confidantes, welcome newcomer Jane (Shailene Woodley) and her son, Ziggy (Iain Armitage), into their inner circle, much to the chagrin of another mother, Renata (Laura Dern). An incident with the children at school causes battle lines to be drawn.

Detectives Adrienne Quinlan and Walt Gibson walk through a crime scene at a local school, site of an Audrey Hepburn/Elvis Presley-themed fundraiser. Gibson notes there are a number of witnesses to the crime, but "not a lot of clarity." The detectives take note of the body at the bottom of a staircase.

On the first day of school some weeks before the fundraiser, Martha Madeline Mackenzie meets single mom Jane Chapman, who is new to the community. Jane, significantly younger than the other mothers, is nervous for her son, Ziggy's first day, but is happy to see Madeline's precocious daughter, Chloe, take him under her wing. Madeline introduces Jane to Celeste, whose twins, Max and Josh, are also 6. The three women make a fast connection.

Madeline is irritated that her ex-husband Nathan is present at orientation with his new wife, Bonnie, and their daughter, Skye. Her issue, she explains, is not about Nathan specifically, but that he never bothered to be at their daughter Abigail's first day of school. Bonnie apologizes to Madeline for recently signing a petition against a show being done by the local theater where Madeline works.

Another mother, Renata Klein mistakes Jane for a nanny, but Madeline rushes to correct her. The children finish orientation, and Jane is thrilled to hear Ziggy had fun. The mood changes however, when Renata's daughter, Amabella says one of the other children tried to choke her. Encouraged by the teacher to point out the persona responsible, Amabella accuses Ziggy. Renata looks to Jane and her son for an apology, but Ziggy is so adamant he didn't do it, Jane doesn't have the heart to make him apologize for something she believes he didn't commit.

At home that evening Renata explains to her husband, Gordon, the other women at school don't like her because she has a career.

Madeline confesses to her husband, Ed, she feels she is losing Abigail to Nathan and Bonnie. Trying to connect, Madeline and Abigail share a moment at the piano. Abby says she'll get Bonnie to start a new petition "for" Madeline's play.

Celeste tells her husband, Perry, about the incident with Amabella. Perry suggests it's best the twins avoid Ziggy, but Celeste believes this might be an overreaction and tells him he's being ridiculous. Perry responds by violently grabbing her arm - something he has clearly done before.

Each woman reflects on the day's events: Renata looks out across her backyard; Celeste lies awake in bed; Jane unlocks a drawer and stares inside; and Madeline locks eyes with herself in the bedroom mirror.