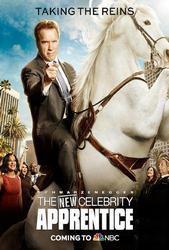 Sixteen celebrities are set to compete for their favorite charities when "The Celebrity Apprentice" shifts to Los Angeles for its eighth season, where twice-elected California governor and international movie superstar Arnold Schwarzenegger reigns over the Boardroom.

The celebrity lineup is as follows:

New state-of-the-art headquarters in Silicon Beach, Southern California's ever-growing technology hub, will house Schwarzenegger's Boardroom and the center of operations for the exciting and diverse lineup of business-savvy celebrities. Contestants will compete in challenging, business-driven tasks, more focused than ever on technology and innovation, testing their ability to work together as a team while raising money and awareness for their favorite causes.

Each episode will conclude with a compelling Boardroom showdown, as Schwarzenegger evaluates the performances of all of the players before deciding which team wins the challenge and who will be sent home.